Luis Figo net worth: Luis Figo is a Portuguese former professional soccer player who has a net worth of $50 million. Luis Figo was born in Almada, Portugal in November 1972. He was a winger and attacking midfielder who played his youth career with Os Pastilhas and Sporting CP. Figo made his senior career debut in 1989 with Sporting CP where he played until 1995, scoring 16 goals in 137 games.

He then played for Barcelona from 1995 to 2000 and scored 30 goals in 172 appearances. Figo played for Real Madrid from 2000 to 2005 and scored 38 goals in 164 caps. He finished his career with Internazionale from 2005 to 2009, scoring 9 goals in 105 matches. Figo also represented Portugal in international competition at the Under-16, Under-17, Under-18, Under-20, Under-21, and senior levels. He set a record playing in 127 games for the Portugal national team. Figo is considered to be one of the best wingers of his generation and won the Ballon d'Or in 2000, the FIFA World Player of the Year in 2001, and was named to the FIFA 100 list of the world's greatest living players in 2004. He was transferred from Barcelona to Real Madrid in 2000 for a world record fee of 37 million Pounds. Figo won the Portuguese Cup, two Spanish Cups, four La Liga titles, three Spanish Super cups, two UEFA Super cups, one UEFA Cup Winners' Cup, one UEFA Champions League title, four Serie A titles, three Italian Super Cups, and one Intercontinental Cup. Figo retired from the game in 2009. In 2015 he ran for FIFA President against incumbent Sepp Blatter. He founded the private networking site for the professional football industry called Network90. 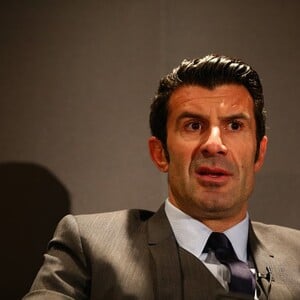