Lilian Thuram Net Worth: Lilian Thuram is a retired professional football (soccer) defender (for the France national team) who has a net worth of $15 million. Lilian Thuram was born Ruddy Lilian Thuram-Ulien January 1, 1972. Born in the French overseas territory of Guadeloupe in the Caribbean, his family relocated to mainland France in 1981.

Lilian Thuram's football career began with Monaco of the French Ligue 1 in 1991. He then transferred to Parma (1996–2001) and then to Juventus (2001–2006), eventually joining Barcelona in 2006. In 2008, he was reported as having signed a one-year contract with an option for another year with Paris Saint-Germain; however, the deal was canceled shortly afterward when Thuram was diagnosed with a heart defect. Just days after the announcement, Lilian Thuram announced his final retirement from professional football due to his condition. His cousin is Standard Liege player Yohann Thuram. Lilian Thuram has two sons by his first wife Sandra. He is reportedly separated from French TV host Karine Le Marchand, who registered then withdrew a complaint of domestic violence against him. In September of 2006 Thuram sparked controversy when he invited 80 people, who were expelled by French Minister of the Interior Nicolas Sarkozy from a flat where they lived illegally, to the football match between France and Italy. He also took part in a January 2013 march through Paris by supporters of the Ayrault government's plan to legalize same-sex marriage. 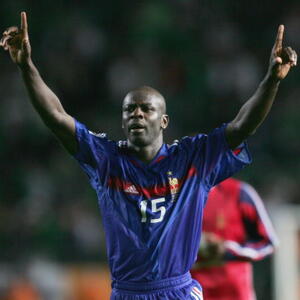