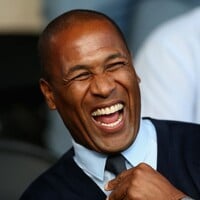 Les Ferdinand net worth: Les Ferdinand is an English professional soccer coach and former professional soccer player who has a net worth of $12 million. Les Ferdinand was born in Paddington, London, England in December 1966. He is a striker who played for Southall and Hayes in his youth career. Ferdinand started his senior career for Hayes from 1986 to 1987. He played for Queens Park Rangers from 1987 to 1995 where he scored 80 goals in 163 appearances. Ferdinand was loaned to Brentford in 1988 and to Besiktas from 1988 to 1989. He played for Newcastle United from 1995 to 1997 scoring 41 goals in 68 caps. Ferdinand played for Tottenham Hotspur from 1997 to 2003 where he appeared in 118 games and scored 33 times. He played for West Ham United in 2003 and for Leicester City from 2003 to 2004. Ferdinand played for Bolton Wanderers from 2004 to 2005 and for Reading in 2005. He also represented England in international competition from 1993 to 1998. In 2015 Ferdinand became the Director of Football and caretaker manager of the Queens Park Rangers.