Landon Donovan Net Worth and Salary: Landon Donovan is a former American soccer player who has a net worth of $14 million. He currently serves as the manager, co-founder, and vice-president of San Diego Loyal SC, which plays in the USL Championship. During his career, Landon gained a reputation as a prolific striker while playing with some of the best clubs in the world. He is considered one of the greatest American soccer players of all time.

In the past, Landon has played for teams like Bayer Leverkusen, Bayern Munich, and Everton. In addition, Donovan has been an integral part of Major League Soccer, playing for teams such as the San Jose Earthquakes, the Los Angeles Galaxy, the San Diego Sockers, and many others. Outside of his club career, Donovan was also an important part of the US Mens Soccer Team, appearing in various tournaments and becoming the highest-scoring American male player in World Cup history.

Early Life: Landon Timothy Donovan was born on March 4th of 1982 in Ontario, California. Raised alongside a twin sister named Tristan in Redlands, California, Landon started playing soccer at a very early age. His father Tim was a Canadian semi-professional ice hockey player at one point, and Landon holds Canadian citizenship because of his father's roots.

Donovan first started playing soccer at the age of six, and he allegedly scored seven goals during his first-ever match. Throughout the next few years, Landon played in a number of Californian clubs, becoming fluent in Spanish due to the prevalence of Latin players in these leagues. By 1997, he was accepted into the US Youth Development Program and excelled during the 1999 FIFA U-17 World Championship.

Career: Shortly after impressing at the FIFA U-17 World Championship, Landon was signed by Bayer Leverkusen with a six-year contract. Donovan struggled to adjust to life in Germany, although he performed well on the pitch. This resulted in the German side sending Landon back to the United States on loan to the San Jose Earthquakes in 2001. During the next four years, he became a huge part of Major League Soccer and scored plenty of goals.

Eventually, his loan spell ended and he was brought back to Bayer Leverkusen. Once again, Donovan failed to adjust to German life and requested another transfer after playing just seven matches. Just like before, he was sent back to the United States and signed for the LA Galaxyas the highest-paid American player in the league. During this time in Los Angeles, Landon played alongside figures like David Beckham and performed well throughout.

During his time at LA Galaxy, Donovan was loaned to a number of clubs. In 2008, he played extensively with Bayern Munich. He then joined Everton in the English Premier League, where he quickly became a fan favorite. In 2012, Donovan announced that he was considering a break from professional soccer. Nevertheless, he returned to training in 2013 and continued to perform in an exemplary manner. By the end of 2014, he had announced that he was retiring from the game entirely.

In 2016, Donovan returned from retirement and joined the LA Galaxy once again. He ended up playing in the six remaining games of that season, scoring one goal. This marked the beginning of his second retirement. Unbelievably, Landon came out of retirement a second time two years later, signing with Club Leon of the Liga MX. In 2018, Club Leon decided to terminate Donovan's contract early.

Playing Style: Landon Donovan was known to play many positions over the course of his career, although he was primarily deployed as a striker. Possessing lightning-quick pace, Donovan was able to beat players with ease at the peak of his career. Towards the latter part of his career, Landon shifted back into the midfield as an attacking, creative playmaker. He was also known for his work rate, and he often raced back to defend if necessary. In addition, Donovan was praised for his penalty-taking technique.

Post-Playing Career: After finally retiring permanently from professional soccer, Landon began a career as a manager. In 2019, he first started managing San Diego Loyal SC, a team that he had helped co-found. Although Donovan had never coached a team before, he relied on a number of skilled staff members to help him.

In addition, Landon Donovan has pursued a career as a sports pundit and analyst for networks like ESPN and Fox Sports. Among over events, he helped cover the 2014 World Cup.

Relationships: In 2006, Landon Donovan married Bianca Kajlich, an American actress, although they divorced three years later. In 2015, he married his second wife, Hannah Bartell. They welcomed their first son into the world in 2016.

Real Estate: In 2012, it was reported that Landon had sold his home in Manhattan Beach for $4.295 million. The 5,715-square-foot home features a gym, a home theater, and an extensive wine cellar. Other notable additions include 11-foot ceilings, antique tiling, and custom wrought ironwork.

In 2016, Donovan sold another Californian property in La Jolla for $2.9 million. This residence sits on a hillside, half-acre lot with beach access and a volleyball court. Along with exceptional views of the ocean, the home offers 6,840 square feet of living space and a detached guest/pool house. Although Landon originally listed this home for $3.65 million one year prior, he steadily reduced the price and settled for just under $3 million. He had originally purchased the undeveloped parcel in 2014 for $3.35 million, so he incurred a significant loss on this deal. 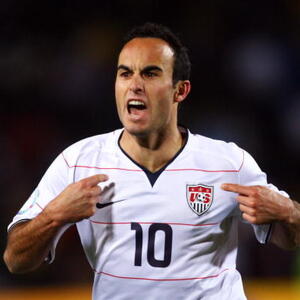