How much is Kwadwo Asamoah Worth?

Kwadwo Asamoah Net Worth and salary: Kwadwo Asamoah is a Ghanaian professional soccer player who has a net worth of $6 million. Kwadwo Asamoah currently plays for both the Italian club Juventus and the Ghana national football team. Nicknamed "Kojo", Asamoah was born in Accra, Greater Accra, Ghana in 1988. As a youth Kojo played for Kaaseman, Liberty Professionals, Bellinzona, and Torino. He was signed in June 2008 by Serie A club Udinese. He turned in good performances in the Africa Cup of Nations and the 2010 World Cup, which led other clubs to take interest in him. Kojo joined Juventus in July 2012. Asamoah plays both left midfielder and wing-back positions. He was named the CAF Most Promising African player in 2010. Kojo was also honored with the title of Ghana Player of the Year in both 2012 and 2013. He was ranked 27th best soccer player in the world by Bloomberg in 2013. Kojo has played for the Ghana national team since 2006. He scored three goals with the national team in 2013. Kwadwo Asamoah has had some big shoes to fill. He was hailed as being the first great player from Ghana since Abedi Pele. It is thought that Ghana has a chance to advance from their group in the 2014 FIFA World Cup. Kojo is the central creative intelligence for his team. He has a leadership role for his country and hopes to lead the Black Stars to victory. 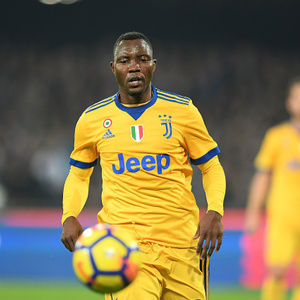