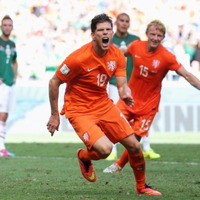 Klaas-Jan Huntelaar Net Worth: Klaas-Jan Huntelaar is a Dutch soccer striker who has a net worth of $35 million. Dirk Jan Klaas "Klaas-Jan" Huntelaar was born August 12, 1983 in Voor-Drempt, Gelderland, Netherlands. He was scouted as a youth by Go Ahead Eagles, but the distance required to travel to the team's base in Deventer prevented him from joining the club. Soon after he was scouted by De Graafschap and in April of 1994 he signed his first youth contract at the age of 11. During his first two years with De Graafschap, Huntelaar played in various positions including left wing, attacking midfield, left back and even goalkeeper. It was only in his third year that he was deployed as a striker. In 1988, he began a career with VV Hummelo en Keppel before he moved to VBV De Graafschap Doetinchem in 1994. He spent the rest of his youth playing for them then moved to PSV Eindhoven in 2000. Huntelaar played just one senior game for Eindhoven, spending most of his time playing for smaller teams on loan. Huntelaar moved to SC Heerenveen in 2004 where he scored 17 goals in his debut season and helped Heerenveen qualify for the UEFA Cup. Next he was signed by Dutch giant Ajax Amsterdam who paid a reported $12 million for the striker. He played for Amsterdam for two years and was the league's top scorer in both seasons, scoring an incredible 76 goals in 92 games. In January 2009, Real Madrid signed Huntelaar to replace their injured captain Raúl. He got off to a difficult start at Madrid, ultimately scoring 8 goals in his 20 league games and leaving Madrid after 6 months, citing that Madrid's new coach, Pelligrini, would not let him play. Italian club AC Milan signed Huntelaar to a 4-year contract in the summer of 2009, but he never fit on Milan´s team. He then transferred to German Bundesliga team Schalke 04 in 2010, which would turn out be the best part of his career outside of the Netherlands, including winning the German national cup with Schalke in 2011. He was also the best goal scorer of the Bundesliga during the 2011/2012 season.