Kevin Prince Boateng net worth and salary: Kevin Prince Boateng is a Ghanaian football (soccer) player who has a net worth of $20 million dollars. Boateng currently plays for both FC Schalke 04 and for the Ghana national team. He is a Utility Man which means he is used to cover many positions in the game. Boateng has eleven caps with two goals for the Ghana national football team, and was among the ten players nominated for "African Footballer of the Year" in 2010 and 2011. Boateng is known for his intense dynamism; physical strength, extreme aggression, sliding tackles, endurance, immense work rate, exceptional high jumping, acrobatics, both footedness, footspeed, and ball-juggling abilities. Boateng started his career with the club Reinickendorfer Fuchse and was with Hertha BSC in 1994. In 2006 he was nominated as one of the best youth players in Germany. Boateng left the Bundesliga in 2007 to play in the Premier League in England but later returned to the Bundesliga with Borussia Dortmund in 2009. He later played for Tottenham Hotspur and Portsmouth in the Premier League and for Genoa CFC and AC Milan in Serie A, prior to playing for FC Schalke of the Bundesliga. Boateng holds a German passport, and he played for the German Under-15, Under-16, Under-17, Under-19, Under-20 and Under-21 national teams. In May 2010, Boateng announced that, as he was yet to receive his first senior cap for Germany, due to his "take–no–prisoners sliding tackle" that annihilated the ligaments of Michael Ballack, he had accepted an offer from the GFA with an offer to play for the Ghanaian national team. Boateng held his first training session with his team Black Stars in Ghana, prior the 2010 FIFA World Cup in May 2010. Later that month, Boateng was cleared to play for Ghana by FIFA, and attended training with the national side Black Stars for the first time in the same month. Boateng was part of the Ghana squad for the 2010 FIFA World Cup in South Africa and during the 2010 World Cup played in Ghana's game against Germany for whom his half-brother, Jerome Boateng plays. In November 2011, Boateng announced his international retirement, citing fatigue from travel, meaning Boateng missed the chance to contend with Black Stars in January 2012 to win the 2012 Africa Cup of Nations. Nevertheless, in 2013, Boateng was selected for the Ghana national football team's 2014 FIFA World Cup qualification play-offs against Egypt and is currently playing for Ghana in the 2014 FIFA World Cup. 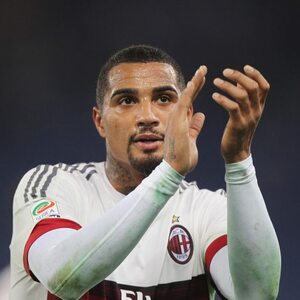