Kevin De Bruyne Net Worth: Kevin De Bruyne is a Belgian professional soccer player who has a net worth of $60 million. He is probably most-famous for being an attacking midfielder or winger for Manchester City. He has also played for the German Bundesliga club VfL Wolfsburg and the Belgium national team.

He was born in Drongen, Belgium in 1991. As a youth Kevin started off playing for KVV Drongen, his hometown team. He then played for Gent and moved to Genk in 2005. He was promoted to Genk's senior squad in 2008. De Bruyne played for Genk until 2012 when he signed with Chelsea of the Premier League. The transfer fee for De Bruyne was rumored to be around $7 million. He stayed with Chelsea until 2014, although he was loaned back to Genk and also to Werder Bremen. In January 2014 Kevin signed with Wolfsburg for $18 million. Kevin De Bruyne has represented Belgium's national team since 2008, as a member of the country's under-18, under-19, and under-21 teams. He started playing for the senior team in 2010. He scored four goals and helped the Red Devils qualify for the 2014 FIFA World Cup competition. De Bruyne plays attacking midfielder or winger and was named Bundesliga's Young Player of the Year in the 2012-13 season. 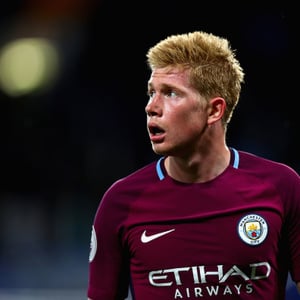