Kenneth Omeruo Net Worth and salary: Kenneth Omeruo is a Nigerian professional soccer player who has a net worth of $3 million. A center back who is currently playing for the English club Middlesbrough on loan from Chelsea, he also represents the Nigerian national team. He was born in Abia State, Nigeria in 1993.

He played for the Standard Liege as a youth. He was signed with Chelsea in 2012. Although he has been with Chelsea his whole professional career, he has been loaned out to ADO Den Haag and Middlesbrough. In May of 2014 Omeruo signed a new three-year deal with Chelsea. With ADO Den Haag Omeruo has the distinct honor of being the only Dutch league player to even score a goal, and own goal, and be given a red card in one single match. Kenneth Omeruo has played for the Nigerian national team since 2009, playing for the under-17, and under-20 teams and joined the senior club in 2013. His under-20 team made the quarterfinals in the 2011 FIFA U-20 World Cup. He helped Nigeria win the 2013 Africa Cup of Nations. He went on to play for Nigeria at the 2013 FIFA Confederations Cup. As a center back, Omeruo's style is described as tall and rangy but strong. He has been complimented for his level-headedness and determination. 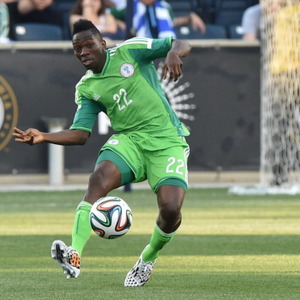