What is Kaká's Net Worth and Salary?

Kaká is a Brazilian professional soccer player who has a net worth of $90 million. Recognized as one of the greatest players to ever walk onto a football pitch, Kaká wowed fans with mesmerizing technical skills and incredible vision. Operating behind the front line as an attacking midfielder, Kaká could score goals, dribble past players, and assist his teammates with near-limitless proficiency. After establishing a stellar reputation in Italy with AC Milan, Kaká moved to Real Madrid in 2009. Unfortunately, his form dipped after arriving at the Bernabeu, and he finished his career in America's MLS with Orlando City. Outside of his club career, Kaká played for the Brazilian national team and won the FIFA World Cup in 2002.

Kaká retired in 2017, and although many observers hail his contribution to the modern game, others lament about what could have been. In the eyes of countless fans, injury problems prevented Kaká from reaching his full potential. If he had been allowed to continue with a consistent run of form, he probably would have been mentioned in the same breath as players like Messi, Ronaldo, and Cristiano. During the peak of his career, he was considered one of the most influential people on the planet, and he racked up 10 million followers on Twitter faster than any other sportsperson. In addition, he has been recognized for his humanitarian work after retiring from football.

Ricardo Izecson dos Santos Leite was born on April 22nd of 1982 in Gama, Federal District, Brazil. Raised in an upper-middle-class household, Ricardo was given the resources he needed to excel in both academics and athletics from an early age. His commonly-known name is the result of a family inside joke; Ricardo's younger brother couldn't pronounce the word "Ricardo" and used the name "Caca" instead. This evolved into Kaká, Ricardo's nickname.

At the age of seven, Ricardo moved with his family to São Paulo. Once there, he started playing for youth clubs and gained the attention of São Paulo FC, who enrolled Kaká in their youth academy. Despite a serious spinal fracture at the age of 18, Kaká excelled for the club and made his professional debut at the age of 19. After scoring a number of impressive goals, he was signed by AC Milan in 2003 for 8.5 million euros.

Kaká slotted easily into the starting lineup alongside legends like Inzaghi and Shevchenko. The young Brazilian continued to score goals, but it was his playmaking ability that really made him shine. After his debut season in Italy, he was named Serie A Footballer of the Year and was nominated for the Ballon d'Or. After linking up with Andrea Pirlo in the midfield, Kaká was given full license to rampage through opposing teams' defenses with the veteran Italian sitting deep as the primary playmaker. In 2005, AC Milan narrowly missed out on winning the Champions League. 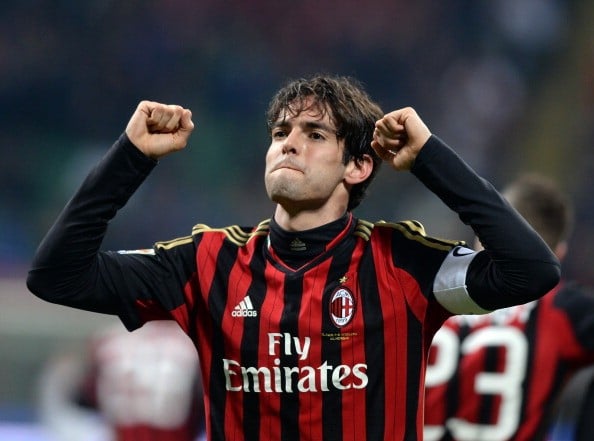 By 2006, Kaká was scoring hat-tricks for AC Milan, and he was made the focal point of the entire team after the departure of Shevchenko. A high point came when he scored three goals against Manchester United in the semi-finals of the 2006 Champions League. In 2007, AC Milan won the Champions League with a win over Liverpool in the finals. That year, Kaká also won the Ballon d'Or.

By the end of the 2000s, various clubs were making insane offers in a bid to sign Kaká. Manchester City offered over 100 million pounds, although negotiations fell through. It was Real Madrid who eventually succeeded in snatching up the player, and the Spanish side paid 68.5 million euros for the Brazilian. However, his future with Los Blancos was immediately called into question after he received treatment for a chronic left knee injury, which sidelined him for four months.

Although he appeared sporadically for Real Madrid over the next few years, injuries continued to hamper his progress. In 2013, Kaká returned to AC Milan – only to suffer more injuries. Eventually, he joined Orlando City and accepted a salary that made him the highest-paid player in MLS history at the time. Although he spent a period back in São Paulo on loan, Kaká returned to Orlando City and finished his career in 2017.

Impact on the Sport

Kaká's impact on football was something of a double-edged sword. On the one hand, his skill was legendary. Fans, players, and managers all agreed that during a stretch of time at AC Milan, Kaká was the best player in the world. Defenders seemed to be powerless to stop his weaving, gliding runs towards goal. Despite being over six feet tall, Kaká moved with a sense of grace and control that a smaller player with a lower center of gravity might possess. With his height came power, and this combination turned the Brazilian player into an unstoppable juggernaut.

On the other hand, Kaká seemed to fade into obscurity before he could really make a lasting impact on the game. After suffering knee and groin injuries at Real Madrid, Kaká's mobility, pace, and acceleration were destroyed. Not long after arriving on the scene, he was relegated to the back pages of football history, lost in the "haze" that preceded the dominance of Messi and Cristiano during the next chapter.

In 2005, Kaká married Caroline Celico, his childhood sweetheart. After having two children together, the pair announced their divorce in 2015.

While playing for AC Milan, Kaká's annual salary reached a sum of $10 million. During his prime, he also earned an estimated $5 million per year from endorsements with companies like Adidas, Hyundai, and WiseUp. When you combine Kaká's salary and endorsements, was one of the highest-paid soccer players in the world at his prime. Kaká still has a modeling contract with Armani.

In 2015, it was revealed that Kaká had purchased a $3.4-million mansion in the affluent Isleworth neighborhood of Orlando. He joined other sporting legends in the neighborhood such as Vice Carter and Grant Hill. The six-bedroom home provides access to the private Lake Brenda and sits on a piece of land nestled into a cul-de-sac.