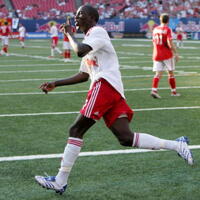 Jozy Altidore net worth and salary: Jozy Altidore is an American professional football (soccer) player who has a net worth of $8 million dollars. Jozy Altidore was born in Livingston, New Jersey, and grew up in Boca Raton, Florida. He began playing soccer while he was in elementary school, and went on to train with the Under-17 National Team. The New York Red Bulls drafted him in 2006, but he did not officially join the team until late in the season, as he was still finishing high school. He made his professional debut in August of 2006, and went on to become the youngest player to score in a Major League Soccer Playoff game ever. He was 16 years, 337 days old. In 2008, he signed with Villareal for $10 million. It is the largest amount that has ever been paid for a MLS player. Since then, he has played, on loan, for Xerez, Hull City, and Bursaspor. He then spent two seasons with AZ, and currently plays for Sunderland and the US National team.