John Terry Net Worth: John Terry is an English professional footballer (soccer player) who has a net worth of $70 million. John Terry was born December 7, 1980 in Barking, London, England. John plays centre back position and was the captain of Chelsea in the Premier League. He was also captain of the England national football team (2006-2010) and (2011-2012).

Considered one of the best central defenders of his generation, Terry was named UEFA Club Defender of the Year in 2005, 2008 and 2009 and PFA Players' Player of the Year in 2005. He was also included in the FIFPro World XI for five consecutive seasons from 2005 to 2009. John Terry was named in the all-star squad for the 2006 FIFA World Cup, the only English player to make the team. He donned the number 26 shirt for Chelsea. Aside from being one of the best central defenders of his generation, Terry also holds the distinction of being Chelsea's most successful captain, having led them to three Premier League titles, four FA Cups, two League Cups and a UEFA Champions League since 2004. He is one of five players to have made over 500 appearances for Chelsea and is also the club's all-time highest scoring defender. In 2007, he became the first captain to lift the FA Cup at the new Wembley Stadium in Chelsea's 1–0 win over Manchester United and the first player to score an international goal there, scoring a header in England's 1–1 draw with Brazil. On September 23, 2012, John Terry announced he was retiring from international football. He continued playing for Chelsea until 2017 when he joined Aston Villa. 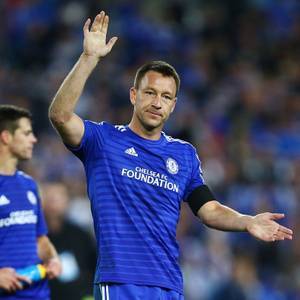