John Obi Mikel Net Worth and salary: John Obi Mikel is a Nigerian football player who has a net worth of $45 million. Born in Jos, Nigeria, in 1987, John Obi Mikel plays midfield for Chelsea and is part of the Nigerian national team. Mikel's career began when he was chosen for the Pepsi Football Academy at the age of 12 and went on to play for Nigeria at the FIFA Under-17 World Championships.

While there, he led Nigeria to the finals and was named second best player in the tournament. In 2005, it was announced that he would sign with Manchester United, but days later, Chelsea also issued a similar announcement that they had come to an agreement with Mikel. Mikel joined a press conference with Manchester United and eventually signed a deal with the European club. A few weeks later, Mikel reportedly went missing while watching a match in the stands and Manchester United accusing Chelsea of kidnapping the football star. It was later revealed that Mikel traveled to London, where he claimed Manchester United pressured him into signing his deal without his agent and that he wanted to play for Chelsea. Nearly a year later, Chelsea reached a deal with Mikel's current club, Lyn Oslo, and was able to ink the Nigerian star to a contract in 2006. Mikel has won several individual honors, including being named African Young Player of the Year in 2005 and 2006 and Chelsea Young Player of the Year in 2007 and 2008. He was selected to the Nigerian national team roster for the 2014 FIFA World Cup. 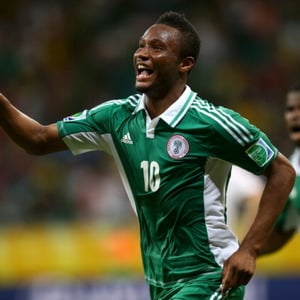