During that time he was loaned to Puntarenas. In 2011 Campbell joined Arsenal. Since joining he was loaned to Lorient from 2011 to 2012, Betis from 2012 to 2013, and Olympiacos from 2013 to 2014. Campbell has won the Primera Division with Saprissa in 2009-10, the Superleague Greece with Olympiacos in 2013-14, and the FA Community Shield with Arsenal in 2014. He also represents Costa Rica in international competition playing their Under-17 and Under-20 teams before joining their senior side in 2011. He played in the 2014 FIFA World Cup and scored Costa Rica's first goal of the tournament. He has almost 40 caps for Costa Rica and has also played in the CONCACAF Gold Cup and Copa America. 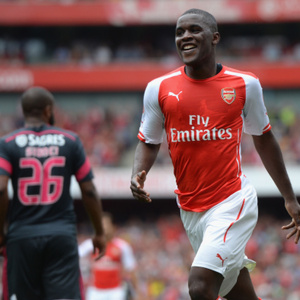