Jay Jay Okocha net worth: Jay Jay Okocha is a Nigerian former football player who has a net worth of $15 million dollars. Born in Enugu, Nigeria on August 14, 1973, his full name is Augustine Azuka Okocha. He is best known for playing as a midfielder for teams including Borussia Neunkirchen, Eintracht Frankfurt, Fenerbahce, Paris Saint-Germain, Bolton Wanderers, Qatar SC, and Hull SC.

He also played for the Nigeria national team from 1993 to 2006. During his youth career he played for the Enugu Rangers. He appeared in the FIFA World Cup with Nigeria in 1994 as well as the 1998 FIFA World Cup against Spain in which he lost. He has received nine club honors and three international honors throughout his career and was voted as number twelve on the list of the greatest African footballers of the last half-century in 2007. In 2003 and 2004 he was named BBC African Footballer of the Year. He has also been named in the FIFA 100. He has two children by the names of Daniella and A-Jay and has been married to his wife, Nkechi, since 1994. 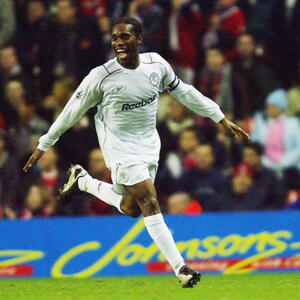