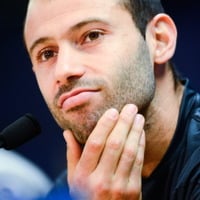 Javier Mascherano net worth: Javier Mascherano is an Argentine professional soccer player who has a net worth of $40 million dollars. Javier Mascherano played his youth career with River Plate and was called up to the team's senior squad in 2003. In 2005 he was acquired from River Plate to Corinthians for $15 million. After that he played for West Ham United for a season and then signed with Liverpool from 2007 to 2010 for $18.6 million Euro. In 2010 he signed four year contract with FC Barcelona for $24 million Euro. He signed extensions in 2012 and 2014 with a buyout clause of $100 million Euro. Javier has won the Primera Division Argentina, Brazilian Serie A, La Liga, Copa del Rey, Supercopa de Espana, UEFA Champions League, and UEFA Super Cup. He has represented Argentina in international play since 2003. He has made over 100 appearances for his country. He has played in the World Cup in 2006, 2010, and 2014. He has also played in the Olympic Games in 2004 and 2008, winning both and becoming the first male soccer play to win two gold medals since 1968. He was the captain of Argentina from 2008 to 2011 and made the finals of the 2014 FIFA World Cup.