Javier Hernández Net Worth: Javier Hernández is a Mexican footballer (soccer player) who has a net worth of $30 million. Also known as "Chicharito," Hernández began his club career in Mexico with Guadalajara in 2006. Four years later, he had signed with Manchester United, which was one of the biggest clubs in the world at the time. Although he scored 20 goals in his debut season, Javier was eventually relegated to the sidelines. He was subsequently loaned out to Real Madrid before signing with German side Bayer Leverkusen.

Two seasons later, Hernández returned to the Premier League and spent a number of seasons with West Ham. During this period, he established himself as one of the most efficient strikers in Premier League history with a stunning minutes-per-goal ratio. Javier eventually spent one season in Sevilla before signing with LA Galaxy in 2020, where he is expected to finish off his career during his 30s.

Early Life: Javier Hernández Balcázar was born on June 1st of 1988 in Guadalajara, Jalisco, Mexico. Raised in a Roman Catholic household, Javier adopted the nickname "Chicharito" at a young age. This is because his father's nickname was Chícharo, which means "pea." This is a reference to the fact that Javier's father has green eyes. "Chicharito" means "little pea." Javier remains a staunch Roman Catholic, and to this day he often gets on his knees to pray before kickoff. Hernández was born into a family with strong footballing roots, and both his father and his grandfather played professionally.

Javier first started playing football at the age of seven, and he lived in Morelia for four years while his father played professionally for Monarcas Morelia. Although Chicharito played briefly for his school during his elementary education, it was quite clear that he was destined for a professional career in soccer. At the age of just nine, he joined C.D. Guadalajara. At the age of 15, he has signed his first professional contract. Despite the fact that his athletic career was advancing quickly, Hernández studied business administration classes at the Universidad del Valle de Atemajac while training.

Career: In 2006, Chicarito made his debut for Guadalajara, scoring within five minutes of coming on as a substitute. Despite this promising start, Javier went the next 13 games without a single goal. Things improved for Hernández when he scored 11 goals in 17 appearances during the 2009 Apertura. More goals quickly followed in various league tournaments and cups. By 2009, Javier had attracted the attention of Manchester United, who had sent a scout out to Mexico to watch him play. The scout was impressed, and despite his young age, the English side offered Hernández a contract.

In 2010, Javier signed with Manchester United for an undisclosed fee. He then made his debut of July that year, replacing Nani and scoring his first goal for the club within 18 minutes. In August, Hernández scored his first competitive goal against Chelsea during the Community Shield. By September, he was part of the regular team and he was scoring Champions League goals for his new club. A number of impressive goals soon followed throughout the rest of the league. In April, it was revealed that he was in contention for the PFA Young Player of the Year Award.

During this period, Hernández also started playing for the Mexican national team for the first time, and he would soon become an integral part of his nation's overall strategies. In 2011, major health concerns for the young Mexican began to surface after he suffered a concussion during a practice session. It was later revealed that he had been suffering from acute migraines and headaches since his teen years, and one doctor came to the conclusion that he had some kind of neurological disorder. Although he eventually returned to the starting lineup, Javier suffered a serious ankle injury later in 2012.

Chicharito continued to play well throughout the next few years, but he started to fall out of favor with various managers after the departure of Alex Ferguson. Eventually, he was loaned out to Real Madrid in 2014, but the club decided not to purchase him after he failed to impress during his year-long spell in Spain. Although Javier initially returned to Manchester, he was then given permission to leave the club in 2015.

Hernández then spent three years at Bayer Leverkusen, impressing German fans before returning to the Premier League with West Ham United. He eventually scored his fiftieth Premier League goal with West Ham, setting a new record for Mexican players. In 2019, Hernández completed a transfer to Sevilla and spent one year at the club before signing with LA Galaxy in 2020.

Style of Play: Javier Hernández has established a reputation as a clinical, ruthless goalscorer. He rarely misses when he is given a clear opportunity, and he has been described as a "poacher" by various observers. Inside the penalty area, Chicharito exhibits excellent movement off the ball and exceptional pace. In many situations, Javier seems to "ghost" in behind defenders, tapping the ball in from close range without anyone being aware of his presence. In addition, Hernández is strong in the air despite his height and is willing to work defensively when needed.

Relationships: Hernández is married to Sarah Kohan, an Australian model with Romanian family heritage. In 2019, the couple welcomed their first child into the world.

Salary: In January of 2020, Javier signed a contract that made him the highest-paid player in the MLS. His annual salary is $6 million. The LA Galaxy – which was the signing team – paid a record-setting (for the MLS) $10 million transfer fee for the right to sign Javier.

Real Estate: In 2020, Javier Hernández purchased a home in Beverlywood, Los Angeles for $5.6 million. The home features just over 6,555 square feet of living space and six bedrooms. The modern home was constructed within the past year and sits on a quarter-acre lot. Outside, Chicharito can enjoy a pool, a spa, and a large grassy lawn upon which to practice his soccer skills. There is also a two-car garage out front. 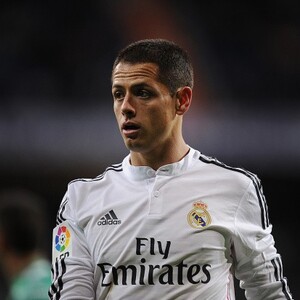