How much is Jared Borgetti Worth?

Jared Borgetti Net Worth: Jared Borgetti is a Mexican retired professional soccer player who has a net worth of $6 million. Jared Borgetti was born in Culiacan Sinaloa, Mexico in August 1973. He was a striker who started his senior career for Atlas in 1994. His longest stay came with Santos Laguna from 1996 to 2004 where he scored 189 goals in 295 caps. Borgetti also played for Dorados, Pachuca, Bolton Wanderers, Al-Ittihad, Cruz Azul, Monterrey, Guadalajara, Puebla, Morelia, and Leon. He finished his professional career with 272 goals in 525 appearances. He won the Primera Division de Mexico in 1996 and 2001 and the InterLiga in 2004 and 2009. Borgetti was named the Mexican League Footballer of the Year and Striker of the Year in 2000 and 2001. He was the Mexican Striker of the Year in 2000, 2001, and 2002. He was the Invierno Top Scorer in 2000 and Verano Top Scorer in 2001. He also finished as the All-time Top Scorer of Santos Laguna. Borgetti also represented Mexico in international competition from 1997 to 2008 where he scored 46 goals in 89 appearances. This accomplishment made Jared the all-time leading goal scorer for the Mexican national team. He won the CONCACAF Gold Cup in 2003 and was the CONCACAF FIFA World Cup qualification Top Scorer in 2006. Borgetti retired in 2010 and works as an analyst for ESPN Deportes and ESPN Latin America. 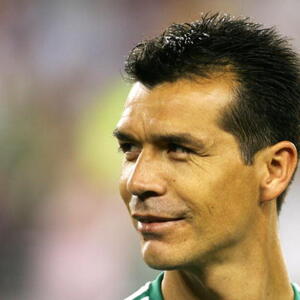