From 2010 to 2011 Vardy played for FC Halifax Town where he scored 27 goals in 37 appearances. He played for Fleetwood Town from 2011 to 2012 where he scored 31 goals in 36 caps. Since 2012 he has played for Leicester City where he has scored 44 goals in 128 games. Vardy has also represented the English national team since 2015. He signed with Leicester City for a non-League record transfer fee of 1 million Pounds in 2012. Vardy broke a record by scoring in 11 consecutive Premier League matches in 2015. 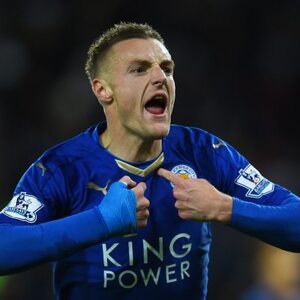