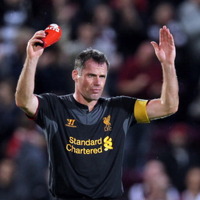 Jamie Carragher net worth: Jamie Carragher is a former professional soccer player who has a net worth of $21 million. Jamie Carragher was born in Bootle, Merseyside, England on January 28, 1978. Carragher spent his entire 17 years as a defender for Liverpool, which makes him the second longest tenured player in the club's history. He also holds the record for most European matches played for Liverpool, with 150. He began his career in 1996, making his first appearance on January 8, 1997 in a League Cup quarterfinal against Middlesborough. While a member of Liverpool, Carragher twice won the FA Cup (in 2000-01, 2005-06), won the League Cup three times–in 2000-01, 2002-03, and 2011-12, won the UEFA Cup once (2000-01), the UEFA Champions League once in 2004-05 and the UEFA Super Cup twice, in 2001 and 2005. He also won the Liverpool Player of the Year Award in 1999, 2005 and 2007, and helped Liverpool win the PFA Team of the Year in 2006. For his Liverpool career, Jamie Carragher appeared in 737 games and scored five goals. He also played in 38 international matches, but did not score a goal in any of them. Since retiring, Carragher accepted a position with Sky Sports, and is a host on their "Monday Night Football" program.