How much is James Rodríguez Worth?

James Rodríguez Net Worth and Salary: James Rodríguez is a professional Colombian soccer player who has a net worth of $80 million. Recognized as a world-class playmaker and a technically-gifted footballer, Rodríguez has played with some of the biggest clubs in the world. A number of teams have expressed interest in James, with some paying exceptionally high transfer fees to put him on their squads. When you take these transfer fees into account, Rodríguez is one of the most expensive footballers in the modern era. As of 2020, he is also the most expensive Colombian player of all time.

Despite his strong technical skills and undeniable potential, James Rodríguez has been accused of failing to deliver by fans and managers alike. Many of his spells at high-profile clubs have ended in disappointment. That being said, James showed the world that he was truly a world-class player after joining Carlo Ancelotti's Everton at the beginning of the 2020-2021 season. Throughout the beginning of the season, his performance silenced critics and confirmed his exceptional quality.

In the past, James has played for teams such as Porto, AS Monaco, Real Madrid, and Bayern Munich. He is also a vital component of the Colombian national team. In 2014, he won the Golden Boot award, having scored the most goals of any player during the 2014 World Cup.

Early Life: James David Rodríguez Rubio was born on July 21 of 1991 in Cúcuta, Colombia. Raised in the city of Ibagué, Tolima, Rodríguez began his professional soccer career at the young age of 14.

Career: Rodríguez started on the squad of Envigado, a second-division club in Colombia that won promotion to the first division a year after James had joined. At the age of 14, James was the second-youngest Colombian in history to start a professional soccer match. In 2008, he was snapped up by the Banfield, a team out of Argentina. By 2009, he was scoring incredible long-range goals for the team.

Not long afterward, clubs across Europe started bidding for Rodríguez. One of the first was the Italian team Udinese, who offered 5 million Euros for the young Colombian in 2010. The bid was rejected, and Rodríguez continued to score amazing goals for Banfield throughout the next year. In 2010, the Portuguese side Porto stepped up to the plate and offered 5.1 million Euros for James, and this time Banfield accepted. Rodríguez then signed a four-year contract with a 30-million Euro release clause. After performing well, James signed a new five-year contract with an increased release clause of 45 million Euros. During the 2011-2012 season, Rodríguez scored a respectable 14 goals for Porto.

During the 2012-2013 season, James played for Porto in the Champions League, scoring against sides like Paris Saint-Germain, Sporting Lisbon, and others. Although hamstring injuries created a setback, James was still a sought-after player throughout Europe. Manchester United offered Porto 30 million Euros to sign him, but the offer was rejected. However, Monaco succeeded in acquiring Rodríguez in 2013 with an offer of 45 million Euros.

He spent just one season at Monaco before signing a new six-year contract with Real Madrid – a team widely considered to be the best in the world. James revealed that this decision was made because "Los Blancos" were his favorite team while growing up. Although the transfer fee was never revealed, it was rumored to be approximately 63 million pounds. This was the fourth-most-expensive transfer in the world at the time.

Although Rodríguez was welcomed to the Bernabeu with open arms, he suffered the fate of many other young players who were signed to Real Madrid. Frequently sidelined by Zidane, James was never really able to show his true potential. Eventually, he requested a loan to Bayern Munich, which was approved. Bayern paid Real Madrid 13 million Euros for the two-year loan deal, with the option to buy James for 42 million Euros at the end.

After rediscovering his form and shaking off past injuries, Rodríguez played well for Bayern. However, the German side did not choose to buy James at the end of the two-year loan period. Forced to return to Real Madrid, Rodríguez played just eight times during the 2019-2020 season, although he was part of the team that won the Spanish league that year.

In 2020, James Rodríguez was given the opportunity to start fresh with Everton. Reunited with Carlo Ancelotti (who had previously managed Bayern), James adapted quickly to the fast style of play in the English Premier League. Scoring a number of goals in his first few matches, it was clear that Rodríguez had promising potential in England.

Style of Play: Part of James Rodríguez's appeal comes from his versatility. He is able to play in a wide range of positions with equal proficiency, including midfielder, winger, and attacker. That being said, James says that he prefers to play as a creative attacking midfielder behind the front line. Although he certainly has plenty of athletic ability in terms of pace and technique, Rodríguez probably receives the most praise for his vision and ability to read the game. Considered a truly intelligent player, James is probably best-suited to the role of playmaker.

Relationships: In 2011, Rodríguez married professional volleyball player Daniela Ospina. Over the course of their relationship, the couple had a child together before announcing their divorce in 2017.

Income: In 2015, it was widely reported that James Rodríguez was earning an annual income of $29 million.

Brand Endorsements: A significant portion of Rodríguez's income is generated from sponsorship and brand endorsement deals. He has a long-standing partnership with Adidas, which began during the early part of this career. Over the years, James has been featured in a range of Adidas commercials. In recognition of his Golden Boot win in 2014, Adidas created a custom boot in honor of James Rodríguez. In addition, he is known for appearing in commercials for Pona Malta, Nestle, and Clear Shampoo. 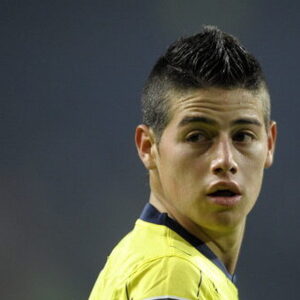