He spent three years in III Liga on the KS Czestochowa club, scoring 11 goals in 24 appearances before moving to Wisla Krakow in the Ekstraklasa league, where he spent another three years, netting five goals in 67 appearances. In 2007, Blaszczykowski moved to Bundesliga, joining Borussia Dortmund. Through the 2013-14 season, he'd scored 30 goals in 217 appearances. Internationally, he's scored 14 goals for Poland. Blaszczykowski has earned a number of honors: with Wisla Krakow he won Ekstraklasa in 2004-05, and with Borussia Dortmund he won the Bundesliga in 2010-11 and 2011-12, DFB-Pokal in 2011-12, and DFL-Supercup in 2013. Individually, he was named the Ekstraklasa Midfielder of the Year in 2006, the Ekstraklasa Best XI in 2006-07, Polish Footballer of the Year in both 2008 and 2010, the Polish Footballer of the Year by Polish Footballers' Association in 2010, and Poland National Football Team's Best Player in 2010. Blaszczykowski is also popular among fans, and was named Footballer of the Year by the readers of "Sport" in 2008 and 2010. 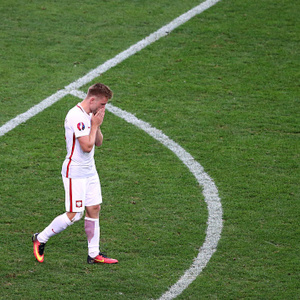