Isco Net Worth and salary: Isco (born Francisco Suarez) is a Spanish soccer player who has a net worth of $12 million. Currently he plays as an attacking midfielder for Real Madrid. Isco was born on April 21, 1992 in Benalmadena, Spain. He spent his youth career in Benamiel and Valencia, joining the latter when he was only 14 years old.

He made his debut with the senior club in 2010, after scoring 16 goals in 52 appearances with the B team. In 2011, Isco moved to Malaga, where he netted 17 goals and dished out nine assists in 82 matches. Since 2013, Isco has been a member of Real Madrid, and scored 11 goals in his first season. Internationally, Isco has played for Spain's youth leagues, and made his debut with the main squad in February 2013. Isco has been credited as "the most exciting young player in Spanish football" by the magazine "Marca," and has already earned a number of honors. With Real Madrid, he won both the UEFA Champions League and the Copa del Rey in 2013-14. He also won the UEFA European Under-21 Championship in 2013. Individually, Isco won the Trofeo Bravo award in 2013, the Golden Boy Award in 2012, and the La Liga Breakthrough Player in 2012. 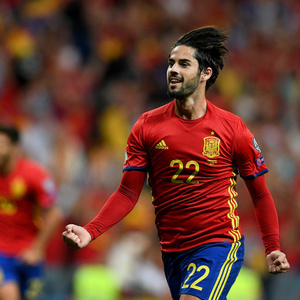