In 2008, he was the captain of the Spanish team that won their first European Championship in 44 years. The Spanish team then went on to win Spain's first World Cup and Casillas won the Golden Glove which is also known as Yashin Award. A few years later, Casillas was captain again when Spain won the 2012 European Championship, and earned additional accolades. He was born in 1981 in Mostoles, Spain and started his football career with Real Madrid's youth system (La Fabrica) during the 1990-91season. At the age of 16, he was called up to the first team to face Rosenborg in the Champions League, but did not debut on the senior side until a year later. In 2000, he became the youngest ever goalkeeper to play in a Champions League final when Real Madrid defeated Valencia, this was just four days after his 19th birthday. Casillas is considered to be one of the finest goalkeepers of his generation and was nominated for the European Footballer of the Year award in 2008, ranking fourth overall. At the end of 2012 he was voted into the UEFA Team of the Year for the sixth consecutive time. In 2011, Casillas was one of a very select group of players to win all major club and national championship titles. Casillas is the third captain in football history to lift the World Cup, the European Cup, and the European Championship cup under his charge. In January 2012, Casillas agreed to a sponsorship deal with Adidas to wear their Response goalkeeping gloves and Predator football boots.

The move to Adidas ended a long running association for Casillas with Reebok, a partnership that began in 2004. Casillas has been dating model, Sara Carbonero for quite some time and the couple have a son together named Martin. 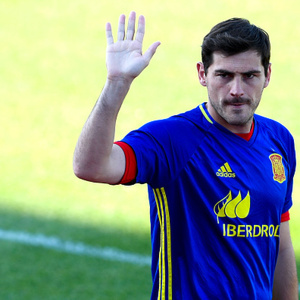