How much is Ian Walker Worth?

Ian Walker net worth: Ian Walker is an English retired soccer player who has a net worth of $34 million. Ian Walker was born in Watford, Hertfordshire, England in 1971. His father Mike Walker is a former goalkeeper for Wales and managed Norwich City and Everton. Ian Walker was the main goalkeeper for Tottenham Hotspur with 312 games with the team. Ian Walker played for five teams during his 20 year professional soccer career. He was with the Tottenham Hotspur from 1989-2001with two loan out periods in 1990 to Oxford United and Ipswich Town. Ian Walker also played for Leicester City from 2001-2005 and the Bolton Wanderer from 2005-2008. He was part of the England national team from 1990-1993 and again from 1996-2004. Ian Walker retired as a player on December 11, 2008. He then made the transition into coaching in 2011 March 2011, when he was appointed as manager of Bishop's Stortford. In April 2012, Ian Walker became the goalkeeping coach for the Shanghai Shenhua of the Chinese Super League. Ian Walker married a Page Three girl, Suzi in the 1990s, and the couple's mock-Tudor mansion was featured on the show "MTV Cribs". Walker currently lives in Shanghai with his dancer girlfriend Samantha Thurman and their son. 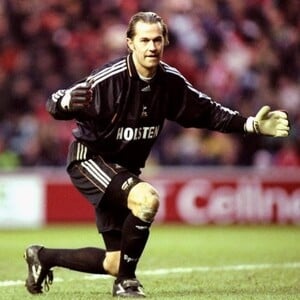