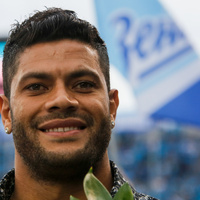 Hulk Net Worth and salary: Hulk is a Brazilian football player who has a net worth of $70 million. Born Givanildo Vieira de Souza in 1986 in Campina Grande, Brazil, Hulk is a winger for Zenit Saint Petersburg. He has played in several countries, including spending time with Esporte Clube Vitoria in Bahia before being loaned to Kawasaki Frontale in Japan. Hulk had some of his best success while on loan with Tokyo Verdy, tallying 37 goals in 42 appearances. Hulk then played with Porto of Portugal before transferring to Zenit Saint Petersburg of the Russian Premier League. He has been part of international play since 2009, making his first appearance in a friendly against England before netting his first two goals nearly three years later in 2012. Hulk was one of three overaged players allowed to travel with the Brazilian team to the 2012 London Olympics. He was part of the 2013 team that beat Spain to win the 2013 Confederations Cup. As of this writing, Hulk plays for the Shanghai SIPG in addition to the Brazilian National team. He was transferred to SIPG in 2016 for an Asian-record $63 million.