Hope Solo Net Worth: Hope Solo is an American former professional soccer player and spokeswoman who has a net worth of $3 million. From 2000 to 2016, Solo was the goalkeeper for the United States National Soccer team. Needless to say, the salaries for female sports stars are nothing like those for men. The vast majority of Hope's net worth has been derived from endorsement deals given to her individually (as well as Team USA endorsements) with companies such as Nike, Gatorade, Simple Skincare, and Bank of America. This is especially true after the success of the Team USA female soccer team in the 2011 FIFA Women's World Cup. Solo has won two Olympic Gold Medals, which the U.S. team earned in the 2008 Beijing Games and the 2012 London Games, and as of 2016, she held U.S. goalkeeper records for wins (153), shutouts (102), longest undefeated streak (55 games), and consecutive minutes played (1,256), to name a few. In 2011, Hope competed on "Dancing with the Stars," coming in fourth place, and she published the autobiography "Solo: A Memoir of Hope" in 2012.

Early Life: Hope Solo was born Hope Amelia Solo on July 30, 1981, in Richland, Washington. Hope's parents, Judy and Jeffrey, divorced when she was 6 years old, and she has three siblings, brothers Marcus and Dave and half-sister Teresa. Solo's father, a Vietnam War veteran, taught her how to play soccer as a child, and when she was seven years old, Jeffrey was arrested for kidnapping after taking Hope and Marcus to a Seattle hotel for a few days instead of taking them to a baseball game as promised. Solo attended Richland High School, where she was a forward on the soccer team. At Richland, she scored 109 goals and led the team to league titles in 1996, 1997, and 1998. During her senior year, Hope led the team to a state championship, and by the time she graduated, she had been named a "Parade" All-American twice. Around this time, she played soccer for the Three Rivers Soccer Club as well.

Solo was recruited by numerous colleges and enrolled at the University of Washington in 1999. She majored in speech communications and took the position of goalkeeper on the school's soccer team, the Washington Huskies. In her new position, Hope ended up becoming the top goalkeeper in the history of the Pac-12 Conference, and when she graduated in 2002, she was the team's all-time leader in saves, shutouts, and goals against average. She was an All-Pac-10 selection all four years of college and was named an NSCAA All-American in 2000, 2001, and 2002. As a sophomore, Solo was the first goalkeeper and Washingtonian to be named Pac-10 Player of the Year, and she was nominated for the Hermann Trophy during her senior year.

Club Career: After college, Hope joined the Philadelphia Charge after being selected fourth overall in the 2003 WUSA Draft. She played in eight games during her first season, and the WUSA folded after the 2003 season. Solo relocated to Göteborg, Sweden, in early 2004 and began playing for the Swedish Premier Division team Kopparbergs/Göteborg FC. The following year, she played for the French First Division team Olympique Lyonnais. After returning to America, Hope played for the Saint Louis Athletica from 2009 to early 2010 and was named WPS Goalkeeper of the Year and U.S. Soccer Female Athlete of the Year during her time on the team. After the Saint Louis Athletica folded, she joined the Atlanta Beat, and at the end of her first season with the team, she had surgery on her right shoulder. Solo signed with magicJack (formerly the Washington Freedom) in 2011, but the team lost its franchise in October, and the WPS suspended operations a few months later because of financial and legal problems. Hope then joined the Seattle Sounders Women, and in January 2013, she was allocated to the Seattle Reign FC for the first season of the National Women's Soccer League. She had to sit out half the season due to wrist surgery, and in October of that year, she transferred to Manchester City W.F.C. in England. Solo returned to the Seattle Reign in 2014, and she was named to the Second XI team after the season ended. In 2016, she played on the national team at the Rio Olympics, and after she said that Sweden's team "played like cowards," she was suspended, and her national team contract was terminated.

International Career: Hope played on U.S. junior national soccer teams, then joined the senior U.S. national team in 2000. In 2004, she was a member of the national team at the Athens Summer Olympics as an alternate, but she became the team's primary goalkeeper in 2005. Solo was the United States' starting goalkeeper at the FIFA Women's World Cup in 2007 and the Beijing Summer Olympics in 2008, helping her team win a gold medal when they defeated Brazil 1–0. In 2011, she played in the FIFA Women's World Cup again and won a Golden Glove award and a Bronze Ball award, and in 2012, she helped the U.S. team win another gold medal, this time at the London Summer Olympics. In 2013, Hope underwent surgery on her left wrist and couldn't play for three months, and in 2015, she helped lead the U.S. team to victory at the FIFA Women's World Cup and took home the Golden Glove trophy.

Personal Life: Hope married former football player Jerramy Stevens on November 13, 2012, after two months of dating. The day before the wedding, Stevens was arrested on suspicion of assault after Solo was injured during an altercation, but he was released the next day due to insufficient evidence. Hope and Jerramy welcomed twins Lozen and Vittorio on March 4, 2020, and later that year, one of the couple's five Doberman Pinschers, Conan, sadly passed away after being shot. Speaking of her beloved dog's tragic death, Solo stated, "Conan was kind and loving. He wandered 30 yards off our property when he was shot. As animal lovers we are struggling to make sense of anyone using their right to own guns to shoot pets of any kind."

In 2014, Solo was one of the celebrities whose nude photos were leaked on the internet after several iCloud accounts were hacked, and in June of that year, she was charged with assault in the fourth degree after being arrested for allegedly attacking her half-sister and nephew. The charges were dismissed in January 2015, then reinstated in October 2015 and dismissed again in May 2018. Hope is passionate about philanthropy, serving as a representative of the Women's Sports Foundation and supporting the Boys and Girls Club and Street Soccer USA. In 2011, she participated in Bank of America's "Let's Run Together" charitable campaign at the Chicago Marathon, resulting in $5,000 being donated to the Seattle Humane Society in her name.

Awards and Honors: In 2009, Solo was named WPS Goalkeeper of the Year and U.S. Soccer Female Athlete of the Year, and she was named the Sports Spectacular Female Athlete of the Year in 2013. In 2012, she received a Do Something Award, Hall of Game She's Got Game Award, and a Phoenix Mercury Woman of Inspiration award. Hope won the FIFA Women's World Cup Golden Glove in 2011 and 2015, the FIFA Women's World Cup Bronze ball in 2011, and the CONCACAF Women's Gold Cup Golden Glove in 2014. She was named the CONCACAF Women's Goalkeeper of the Year in 2015 and the IFFHS World's Best Woman Goalkeeper in 2012, 2013, 2014, and 2015. 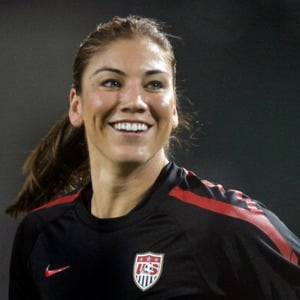