Harry Kewell net worth: Harry Kewell is Australian footballer for the Melbourne Heart who has a net worth of $19.5 million. Harry Kewell was born on September 22, 1978 in Smithfield, Sydney, Australia. At the age of 14, Kewell traveled to England with the Marconi Stallions to play in a match against A.C.

Milan's junior team; Kewell returned to play in England later as a member of Leeds United's youth team. In 1996, he joined as a full member of the professional team. He remained with Leeds United until 2003, scoring 45 goals in 181 appearances. His departure was not pleasant, as he lashed out at the team for ostracizing him and the medical staff for making his injuries worse. Kewell joined Liverpool in 2003 and made 98 appearances over six years, scoring 12 goals. He moved to Galatasaray in 2008 and scored 22 goals in 63 appearances. By 2011, he was a member of Melbourne Victory, netting eight goals in 25 matches. He joined Al-Gharafa in 2013 but only made three appearances, scoring just one goal, before heading to Melbourne Heart. Internationally, Harry Kewell has been a member of the Australian national team since 1996. He's scored 17 goals in 58 appearances. 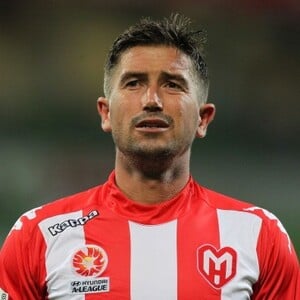