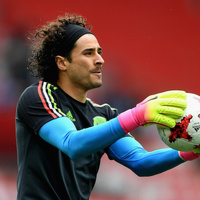 Guillermo Ochoa net worth and salary: Guillermo Ochoa is a Mexican football (soccer) player who has a net worth of $5 million dollars. Guillermo Ochoa is a goalkeeper who is currently a free agent and also a standout player on the Mexican national team. After the 2013-14 season, Ochoa left the French club, Ajaccio, and after playing his final match for the club on May 17, 2014, the club bid farewell to Ochoa in an open letter on social media. Ochoa has been an active part of the Mexican national team for many years. At the age of 20, Guillermo Ochoa was called up by Mexico's former manager Ricardo Lavolpe for the 2006 FIFA World Cup as the third-choice goalkeeper. In addition to the World Cup, Ochoa has also participated in the 2007 CONCACAF Gold Cup and the 2007 Copa América. He made his 2010 World Cup qualification debut in 2009 against Costa Rica. Ochoa made the final 23-man cut for the 2010 FIFA World Cup, but was controversially the back-up goalkeeper to veteran Oscar Pérez. During the 2011 CONCACAF Gold Cup, Ochoa, along with four other members of the Mexico national team, tested positive for the banned substance called Clenbuterol and were withdrawn from the team's tournament squad. All of the players were later acquitted by Mexican Football Federation and the results blamed on contamination of meat; the ingestion of clenbuterol considered non-intentional. In May 2014, Ochoa was named in Mexico's 23-man squad for the 2014 World Cup. In the game against Brazil, Ochoa made four stunning saves, including one following a powerful header from Neymar, that had critics and fans comparing him to Gordon Banks' famed 1970 save against Pele; he was subsequently named "man of the match." In 2006, Ochoa started dating Mexican actress, singer, and songwriter Dulce Maria, but the pair split a year later. After his move to France, he began to date Mexican model, Karla Mora and in 2013 the couple gave birth to a baby girl named Lucciana.