Grégory Coupet Net Worth: Grégory Coupet is a former French football player who has a net worth of $15 million. Born in Le Puy-en-Velay, France, in 1972, Grégory Coupet started playing soccer with his local club team before making his professional debut in the early '90s with Saint-Etienne.

He appeared in 88 matches as a goalkeeper before joining Lyon, where he played from 1997 until 2008. Coupet played in more than 500 contests with the club before playing for Atletico Madrid for one season and later Paris Saint-Germain from 2009 until 2011. Coupet appeared in close to 650 matches during his career. He was also a member of the French national team from 2001 until 2008. Coupet appeared in 34 matches for his native country and was part of the 2002 FIFA World Cup team. He didn't become the team's top goaltender until the retirement of Fabien Barthez in 2006, though he did not make the 2010 World Cup squad and retired from international play soon after. Despite not being the number one goalkeeper, Coupet was part of two French teams that won the FIFA Confederations Cup in 2001 and again in 2003. During his professional club career, he won the 2007 Peace Cup and Coupe de France in 2008. 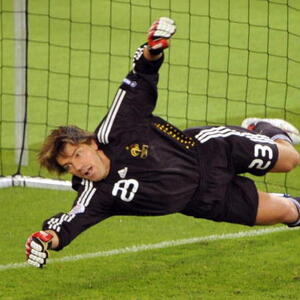