Giovanni Trapattoni Net Worth: Giovanni Trapattoni is an Italian football (soccer) manager and former footballer who has a net worth of $45 million dollars. Born March 17, 1939 in Cusano Milanino, Italy, he is also commonly known by the nickname "Trap" or "Il Trap". Trapattoni is considered the most successful club coach in the history of Serie A.

Aside from coach Udo Lattek, Trapattoni is the only coach to have won all three major European club titles and the only coach to make it with the same club. He is also one of the rare few who have won the European Cup, the Cup Winners' Cup and Intercontinental Cup as both a player and manager. Most recently, as the manager of Republic of Ireland national team, he led his team through a successful UEFA Euro 2012 qualifying campaign and after missing out on the 2010 FIFA World Cup by a narrow margin, his team was knocked out by France. Early in his career he was a successful player with Milan where he played a defender and a defensive midfielder in the early 70s. His coaching career began as a youth team coach at Milan, moving on to be a caretaker coach for two months in 1974 and progressing to first team coach in 1975. Trapattoni has coached Juventus, Internazionale, Bayern Munich and Cagliari, just to name a few. At the age of 71, Trapattoni was quoted as saying, "When I retire, I would like to become coach of The Vatican." 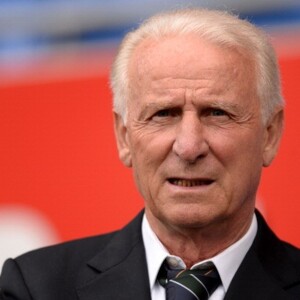