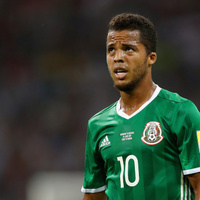 Giovani Dos Santos net worth and salary: Giovani Dos Santos is a Mexican football (soccer) player who has a net worth of $10 million dollars. Giovani dos Santos plays as an attacking midfielder for the Spanish Club, Villarreal CF, and also plays as a winger or forward. Giovani is the son of former Brazilian footballer Zizinho, who played for the Mexican football clubs América and León in the late 1980s. His mother, Liliana Ramírez, is a Mexican national. He began his career when he was very young after being recruited by the Spanish club FC Barcelona and he played for their B team until he turned 18. He made his debut in the senior squad in 2007 and during that same year was named as one of the "Top 50 Most Exciting Teen Footballer" in World Soccer Magazine. After playing one season with Barcelona, he transferred to the Tottenham Hotspurs in 2008 in search of more playing time. He spent most of his time with Tottenham away on loan and was eventually sold to Mallorca in 2012; a year later he was sold to Villarreal. Giovani was a member of the Mexican national under-17 team that won the 2005 U17 World Cup held in Peru. He made his senior debut for the Mexico national team in 2007 and was called to play at the 2010 FIFA World Cup in South Africa. In the 2010 World Cup, Giovani started in every game for Mexico as a right winger. He completed 138 passes without providing an assist. He was voted runner-up for the FIFA Young Player of the Tournament award, which eventually went to Thomas Muller of Germany. He was also a member of the gold medal-winning team at the 2012 London Olympics. Giovani was recently called up by Miguel Herrera to play the 2014 World Cup.