Gilberto Silva net worth and salary: Gilberto Silva is a Brazilian football (soccer) player who has a net worth of $20 million dollars. Gilberto Silva was born in Lagoa da Prata, Brazil, and grew up playing football in his neighborhood. When he was 12, he was invited to join the youth league team of America Mineiro.

However, his mother's ill health and his father's retirement, left him in the position of providing for his family. He left football to work as a carpenter and laborer. He returned to football again a few years later, but again, family responsibilities pulled him away. He returned to football once again when he was in his late teens, and this time, he was able to sign with the team. By 2001, he'd become a force to be reckoned with in Brazilian football and other teams came calling. He has since played for Arsenal, Panahinaikos, and Gremio. He played for the Brazilian National Team from 2001-2010. In 2002, he helped lead the Brazilians to a World Cup victory. Gilberto played in all seven World Cup games in 2002. Today Gilberto Silva is a commentator for ABC and ESPN during the World Cup and other prominent international matches. He was an especially important commentator during the 2014 World Cup since the games were played in Gilberto's home country of Brazil. 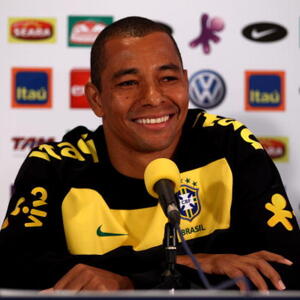