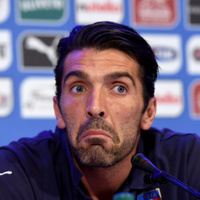 Gianluigi Buffon net worth: Gianluigi Buffon is an Italian professional soccer player who has a net worth of $20 million dollars. Born in Carrara, Italy, Gianluigi Buffon began playing football as part of the Parma Youth League in the early 90s. He distinguished himself early on, and was moved to Serie A play at just 17. He played for Parma for four seasons, won the UEFA cup, and was then transferred to Juventus in 2001 for over $30 million. He has been incredibly successful with Juventus. While with the team, he has been named UEFA Most Valuable Player, and received their Goalkeepers Award. The team has also won the Serie A title multiple times, while he has served as goalkeeper. Internationally, he has played for Italy very successfully, and was part of the FIFA World Cup winning team in 2006. He played for Italy in Euro 2012, serving as both captain and goalkeeper. Again, he played well, but Italy ultimately lost to Spain in the final match with a score of 0 – 4.