Gary Lineker net worth and salary: Gary Lineker is a retired English footballer and sports broadcaster who has a net worth of $35 million. Gary Lineker was born on November 30, 1960 in Leicester, England. Lineker holds the English record for most goals scored in FIFA World Cup finals play, with ten. His first club was his hometown Leicester City, where he played from 1978-85, scoring 95 goals in 194 appearances. From 1985-86, Lineker was a member of Everton, scoring 30 goals in 41 matches. He moved to Barcelona in 1986, where he scored 42 goals in 103 appearances. Also in 1986, he won the FIFA World Cup Golden Boot. In 1989, he joined Tottenham Hotspur, appearing in 105 games and scoring 67 goals. His final club was Nagoya Grampus Eight; he scored four goals in 18 appearances. Combining his club level and international play, he scored 330 goals in his 16-year career. After his playing days, he joined the BBC and hosted their flagship football program "Match of the Day," as well as appeared on the sports game show "They Think It's All Over." In 2003, Lineker was inducted into the English Football Hall of Fame. Lineker has also written columns for the "The Sunday Telegraph" and in 2013 began working for the NBC Sports Network. In 2017, it was revealed that Gary Lineker earns a salary of $3 million per year to host "Match of the Day". 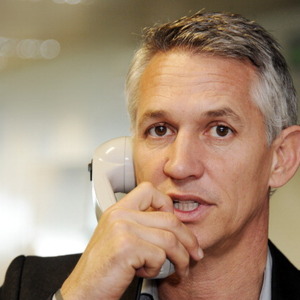