How much is Gareth Barry Worth?

Gareth Barry New Worth: Gareth Barry is an English footballer who has a net worth of $10.5 million. Gareth Barry was born February 23, 1981 in Hastings, England. Barry moved to Aston Villa from Brighton & Hove Albion as a youngster and spent 12 years at the club. He captained Aston Villa and ranks ninth in their all-time list of appearances. In June 2009, he joined Manchester City. In July 2014 he joined Everton on a three-year contract. Barry is a former England international. He spent his youth in different football academies of England, the last of which Brighton and Hove Albion. From 1995 until 1997 Barry was considered one of the best trainees. He was talented, had perfect physical data and developed rapidly, which helped him to sign his first professional contract at the age of 16. During all 12 years with Aston Villa, Barry was one of the key players. From 1997 till 2009 he took part in 365 matches of the league and scored 41 goals, which made him one of the most long-playing footballers in the history of the club. In 2009, when Barry was at the top of his career, he received an offer from Manchester City and he was signed to a five-year contract. From 2009 Gareth Barry made 175 appearances for the club, netting eight goals. In Season 2013/2014, he played on loan at Everton. Barry then signed on for a permanent deal with The Toffees. From 1997 until 2003 the footballer played at U-16, U-18 and U-21 international levels, taking part in 27 games and kicking three goals. In 2007, he made an appearance for the England B national football team. To date, he has made 53 senior international appearances and found the net three times. 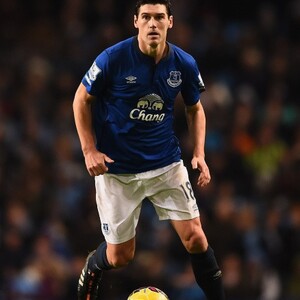