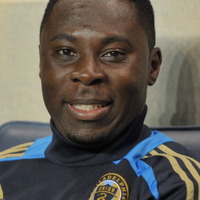 Freddy Adu net worth and salary: Freddy Adu is a Ghanaian American professional soccer player who has a net worth of $12 million. Freddy Adu was born in Tema, Ghana in June 1989. At eight years old Freddy's mother own a Green Card Lottery and the family moved to Maryland and he became a U.S. citizen. At 12 he helped his school's soccer team win the Maryland state championship in 2001. He was named MVP of a tournament with the U.S. Olympic Development Program. He was approached by Italian soccer clubs at 10 years old but his mother turned down six figure offers. At 12 he joined the IMG Academy in Florida. At 14 Freddy made his pro debut in Major League Soccer. He was the youngest American to sign a major league pro contract in any sport after being the #1 pick by D.C. United. In his first year his team won the MLS Cup. He has since played for Real Salt Lake, Benfica, Philadelphia Union, Bahia, and Stabaek. Adu has represented the United States in international competition in the under-17, under-20, and under-23 teams. From 2006 to 2001 he represented the USA at the senior level. He is an attacking midfielder who can also play winger or forward. At one point Adu was considered the next Pele. He has played professionally in the U.S., Portugal, France, Greece, Turkey, and Brazil.