Franck Ribery was born on April 7, 1983 in Boulonge-sur-Mer, France where he began his career at the age of six in 1989 as a youth player for local hometown club Conti Boulogne. He left the club after seven years to join professional outfit Lille, but departed the club after three years. In 1999, Ribéry joined US Boulogne, where he played for two years. Ribéry moved to Turkey in January 2005 joining Galatasaray where he won the Turkish Cup. After six months at Galatasaray, he departed the club in controversial fashion in order to return to France to join Marseille. Ribéry spent two seasons at the club helping the Marseillais reach the final of the Coupe de France in back-to-back seasons.In 2007, Ribéry joined German club Bayern Munich for a then club-record fee of $25 million. With Bayern, he has won four Bundesliga titles, four DFB-Pokal, one UEFA Champions League, and one FIFA Club World Cup. Ribéry is a three-time winner of the French Player of the Year award and has also won the German Footballer of the Year becoming the first player to hold both honors. 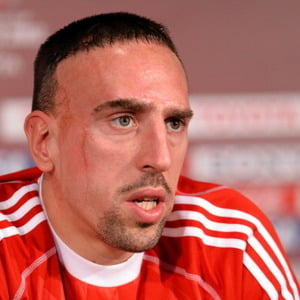