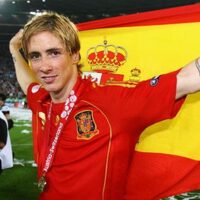 Fernando Torres net worth and salary: Fernando Torres is a Spanish professional football (soccer) player who has a net worth of $90 million. His salary per year is $20 million. In addition to his salary, Torres earns an estimated $9 million per year from endorsements with companies like Pepsi and Adidas. That's enough to make him one of the highest paid football players in the world. Fernando Torres first started to turn international heads in the soccer world by participating in three major tournaments; UEFA Euro in 2004, FIFA World Cup in 2006 and UEFA EURO in 2008. Torres was born in Fuenlabrada, Spain, and joined Parque 84, a football team at the age of five. Torres' team won the Fédération Internationale de Football Association World Cup in 2010. He started his professional career with Athletico Madrid and has since played for Liverpool, Chelsea and Milan. She returned to Athletico Madrid in 2014.