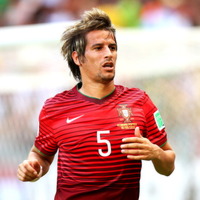 Fábio Coentrão Net Worth: Fábio Coentrão is a Portuguese professional soccer player who has a net worth of $10 million. Fabio Coentrão was born in Vila do Conde, Portugal in 1988. He plays a variety of roles for both the Portuguese national team and his Spanish club team, Real Madrid. Coentrão operates predominately as a left back, but can also play left wing and defensive midfielder. His professional career began with Rio Ave before he signed with Benfica at age 19. With limited playing time available at the Portuguese club, Coentrão was loaned out to a number of different teams, including C.D. Nacional and Real Zaragoza. He began regularly playing with the Benfica team in late 2009. He signed a contract extension with the club through 2016 after becoming fully established with the club and the national team. The Portuguese defenseman joined one of the most prestigious teams in the world, Real Madrid, in 2011. He began playing in La Liga matches in August 2011 of that year. Coentrão debuted on the national team in a 2010 FIFA World Cup qualification playoff against Bosnia and Herzegovina. He played in every game of Portugal's trek to the semifinals of the UEFA Euro 2012 competition.