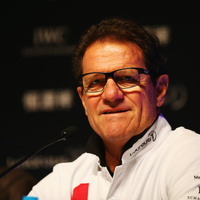 Fabio Capello net worth: Fabio Capello is an Italian soccer manager and former professional footballer who has a net worth of $90 million. Fabio Capello most recently managed Russia's national football team. He previously coached England's national squad for international competitions. A very successful coach, Fabio Capello has won championships in four major cities, and has won the domestic league title with every team he has ever coached. His annual salary for coaching is $18 million.

He was born June 18, 1946 in San Canzian d'lsonzo, Italy. His professional playing career was spent playing for the teams SPAL (1964-1967), Roma (1967-1970), Juventus (1970-1976 and Milan (1976-1980). Since 1987, he has served as manager for the following teams: Milan (served as caretaker), Milan, Real Madrid, Milan, Roma, Juventus, Real Madrid, England, Russia. Capello became the manager of the Russian national team in 2012, following the resignation of Dick Advocaat. During the 2014 World Cup competition, Capello was quoted as saying that 'all referees are against us' after Russia crashed out of the World Cup at the hands of Algeria. In January 2008, the Italian police announced they were launching an investigation into tax irregularities related to Capello. Capello's spokesman dismissed the investigation as 'routine' and said this was merely part of a wider investigation into a number of wealthy Italians. Capello is a self-professed fine art enthusiast and, over the years, has acquired a number of works of art that bring his art collection worth to nearly $14 million. He married Laura Ghisi in 1969 and they had one child, son Pier Filippo, who acts as Capello's agent.