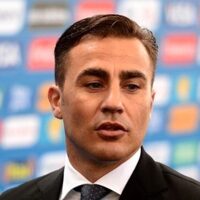 Fabio Cannavaro net worth: Fabio Cannavaro is an Italian soccer coach and professional soccer player who has a net worth of $45 million dollars. Fabio Cannavaro was born in Naples, Italy in September 1973. As a youth he played for Napoli from 1988 to 1992. He was called up to Napoli's senior squad until 1995 when he was sold to Parma. He played for Parma and in 1997 Fabio transferred to Inter Milan with a fee of $23 million Euro. He stayed with Inter Milan until 2004 when he signed with Juventus. In 2006 he was transferred to Real Madrid for $7 million Euro. In 2009 he went back to Juventus and then finished his career for Al-Ahli from 2010 to 2011. Fabio is considered to be one of the best defenders of all time. He won two Coppa Italias and the 1999 UEFA Cup with Parma. In 2007 and 2008 he won La Liga titles for Real Madrid. Cannavaro was also part of the Italian national team from 1993 to 2010. His team won Under-21 European Championships in 1994 and 1996. He became captain of the Italian senior team in 1997 and led Italy to a 2006 FIFA World Cup victory. In 2006 he won the FIFA World Player of the Year award. In 2013 he became an assistant coach for Al-Ahli. Fabio worked for ITV during coverage of the 2014 FIFA World Cup. He is married to Daniela Arenoso and the couple has three children together.