What is Erling Haaland's Net Worth and Salary?

Haaland was born on July 21, 2000 in Leeds, England, though both of his parents are Norwegian. His father, Alfie Haaland, was playing for Leeds United in the Premier League. His mother, Gry Marita Braut, is also an athlete who competed in heptathlon events. In 2004, when Haaland was three, the family moved to Bryne, his parents' hometown in Norway.

As a child, Haaland began playing soccer. However, he also played a number of other sports like handball, golf, and participated in track and field. He did mainly focus on soccer and started playing in the academy of his hometown club of Bryne when he was five.

By the 2015-2016 season, Haaland began playing for Bryne's reserve team. He made an impressive first impression, scoring eighteen goals in only fourteen matches He then was able to start for Bryne in 2016. In 2017, he was offered a trial by the German club 1899 Hoffenheim before moving to play for Molde. He made his debut for the club in April of 107 in a Norwegian Cup match. He finished his first season at Molde with four goals in twenty appearances.

His 2018 season was even more successful, helping the team beat the at the time undefeated league leaders, Brann, in July. He finished the season as Molde's top goal scorer and also received the Eliteserien Breakthrough of the Year award.

In August of 2018, Austrian Bundesliga champions Red Bull Salzburg announced that they were signing Haaland to a five year contract beginning on January 1, 2019. He made his debut for the club at the Austrian Cup quarter-finals and scored his first goal in May over LASK. He made his debut in the UEFA Champions League against Genk and scored three goals in the first half of the match. He went on to have a very successful season.

In December of 2019, Bundesliga club Borussia Dortmund confirmed they would be signing Haaland to a four-and-a-half year contract as soon as the transfer window opened. He made his debut for Dortmund in January of 2020, scoring a hat-trick within 23 minutes. This feat made him only the second player in the team's history to score three goals during the debut match. He scored two goals in this next match, making him the only player in Bundesliga history to score five goals in his opening two matches. Though his total time on the field was less than an hour, he still won January's Bundesliga Player of the Month. He finished the 2019-2020 season with 44 goals in 40 club appearances.

The 2020-2021 season was equally, if not more, successful for Haaland. He scored his 100th goal of his senior career, reaching the milestone in only 146 total appearances. He also won the fan-voted Bundesliga Player of the Season award and finished the season as the top scorer of the Champions League. Additionally, he was awarded best forward of the season. 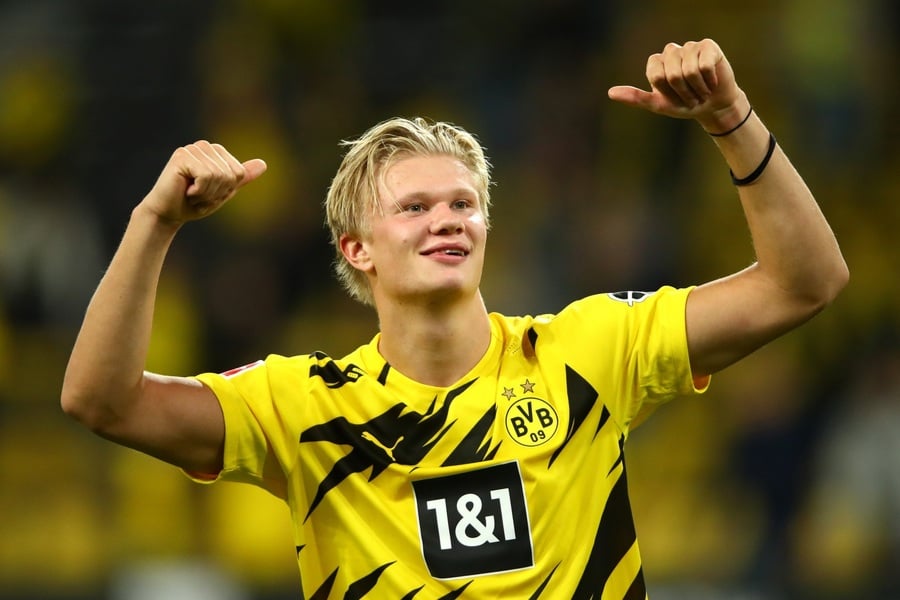 The 2021-2022 season started strong for Haaland as he had a hat trick in the first round of the DFB-Pokal in August. However, he was soon sidelined with a hamstring injury. After a month, he returned to the field but was then out again due to a hip flexor injury.

In May of 2022, Borussia Dortmund announced Haaland would be leaving the club to join Manchester City in the Premier League. Manchester announced in May that they had reached a deal to sign Haaland after activating his expensive release clause.

In addition to league play, Haaland also plays for the Norway national team. He has represented the country at various age groups. He helped the team secure qualification to the 2018 UEFA European Under-19 Championships by defeating Scotland. In 2019, Haaland scored nine goals in the Norway under-20 team's 12-0 win against Honduras at the 2019 FIFA U-20 World Cup in Poland. Though Norway was later eliminated at the group stage. Haaland still won the Golden Boot award as the competition's top scorer.

Haaland is widely thought to be one of the best soccer players of all time, even in his young age. He is considered to be a prolific goal scorer and is able to be both quick and nimble as well as aggressive in protecting the ball. He is also a creative player and effective teammate.

Outside of his parents, Haaland also has a number of family members who are professional athletes. His cousin, Jonatan Braut Nrunes, was the youngest player ever to feature for Bryne in a game when he was only 15 years old. He has another cousin, Albert Tjaland, who also plays soccer.

Haaland reportedly enjoys meditation. He also has received a bit of YouTube music fame after uploading a music video of a song called "Kygo Jo" in 2016. Haaland, along with teammates Erik Botheim and Erik Tobias Sandberg, formed a group called Flow Kingz to make the video. It has since amassed millions of views. 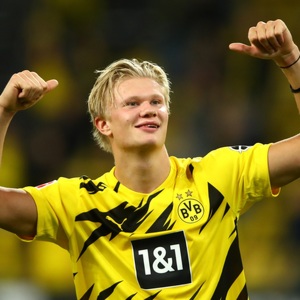