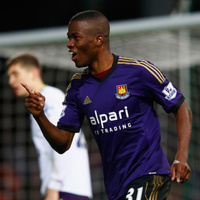 Enner Valencia Net Worth: Enner Valencia is an Ecuadorian professional soccer player who has a net worth of $5 million. Enner Valencia was born in San Lorenzo, Esmeraldas, Ecuador in November 1989. Valencia is a forward who played his youth career for Caribe Junior from 2005 to 2008. He made his senior career debut in 2010 for Emelec where he played in 124 matches and scored 27 goals through 2013. With CS Emelec he won the Serie A in 2013. In 2014 he played 23 matches for Pachuca where he scored 18 goals. In July 2014 Enner joined West Ham United and signed a five year deal worth $12 million pounds. Valencia has also represented Ecuador in international competition since 2012 scoring 8 goals in 15 caps. He played for Ecuador in the 2014 World Cup scoring three goals. Enner Valencia won the Copa Sudamericana Golden Boot in 2013 and the Liga MX Golden Boot at the 2014 Clausura. He has earned the nickname of "Superman". When he first joined Emelec he had to sleep in the club's George Capwell stadium because he did not have any money to stay elsewhere.