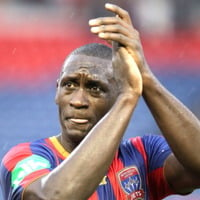 Emile Heskey net worth: Emile Heskey is an English soccer player who has a net worth of $21 million. Emile Heskey was born on January 11, 1978 in Leicester, England. He signed his first professional contract with Leicester City in 1995, and stayed with the club through 2000, scoring 30 goals in 154 appearances. The club won the Football League Cup in 1996-97 and 1999-2000. He then joined Liverpool, and scored 39 times in 150 matches. While at Liverpool, he helped the club win the FA Cup in 2000-01, the Football League Cup in 2000-01 and 2002-03, the UEFA Cup in 2000-01, and both the UEFA Super Cup and the FA Charity Shield in 2001. In 2004, he signed a five-year contract with Birmingham City, staying with the club for just two of those years and posting 14 goals in 68 appearances. In 2006, he signed with Wigan Athletic and notched 15 goals in 82 appearances. From 2009-12, Heskey played for Aston Villa and netted nine goals in 92 matches. Since 2012, he has been a member of the Newcastle Jets. Internationally, Emile Heskey played for the English national team, first as a member of their youth and B squads before making the main team in 1999. He officially retired from international play in 2010, scoring seven goals in 62 appearances.