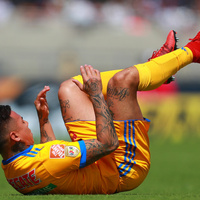 Eduardo Vargas Net Worth: Eduardo Vargas is a Chilean footballer (soccer player) who has a net worth of $3 million. Eduardo Vargas was born November 20, 1989 in Santiago, Chile. Currently signed to Queens Park Rangers (on loan from Napoli), Vargas mainly plays the position of forward, but can also play the position of winger. Vargas started playing on amateur teams in Renca, Santiago, but didn't participate in other youth teams because he lived far from the clubs of greater Santiago. Osvaldo Hurtado and Jorge Aravena (then the coach of Cobreloa) approached Eduardo Vargas and subsequently ran him through a battery of tests, the result of which was Vargas being incorporated into the Cobreloa squad in 2006. He participated in Cobreloa B, third division, and scored against Universidad Arturo Prat in August 2006. To date, his soccer career has seen him playing for Cobreloa (2006-09); Universidad de Chile (2010-12); Napoli (beginning in 2012); Grêmio (2013); Valencia (2014), as well as Queens Park Rangers (2014)—all on loan from Napoli. In September 2013, he broke the Chilean national team's record for goals in consecutive matches (a record previously held jointly by Marcelo Salas and Carlos Caszély) by scoring twice in a 2–2 friendly draw with Spain. During 2013, Vargas scored in six consecutive matches and nine times overall for La Roja. In June 2014, Vargas was named in Chile's 23-man squad for the 2014 FIFA World Cup in Brazil. In Chile's second group match against defending champions Spain at the Estádio do Maracanã, Eduardo Vargas scored the team's opening goal as they eliminated Spain and qualified for the knockouts.