He is considered to be one of the better players of the Canadian national team and has played for the Canadian team since 1998. Dwayne De Rosario also plays for the Canadian national team and is the all time leading scorer for the Canadian team. He has been awarded "Canadian Player of the Year" four times and was the 2011 MLS MVP. De Rosario began his career in 1997 at the age of 18 by signing with the Toronto Lynx of the A-League. Halfway through the season he opted to change clubs and signed with the German team, FSV Zwickau. After two seasons, he returned to North America and played for the Richmond Kickers where he started exploding as a player; he contributed15 goals and 5 assists while leading the team to a 20-6-1 record in 2000. He went on to play for the San Jose Earthquakes, the Houston Dynamo, the Toronto Football Club, the New York Red Bulls, DC United, and most recently returned to the Toronto Football Club. Dwayne De Rosario is married to Brandy De Rosario and has two sons and a daughter. He adopted a strict vegan diet in 1994 but started eating fish ten years later. His cousin is Olympic hurdler, Priscilla Lopes-Schliep. 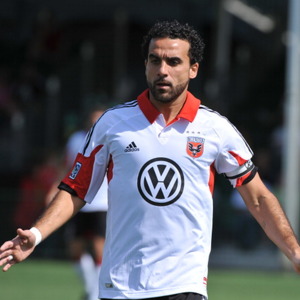