Dirk Kuyt net worth and salary: Dirk Kuyt is a footballer of Dutch origin who has a net worth of $14 million. He was born in Katwijk aan Zee, Netherlands on 22nd July 1980 .He has four siblings .He's married to Getrude, a nurse with one child. His football career began at the age of 5 in Quick Boys, a local amateur team. In 1998 he began his professional career in FC Utrecht and played for them for five years .In his final season at the club he won the Dutch Cup and was awarded the Dutch Golden Shoe Winner.

He was signed by Feyenoord in a €100,000 transfer deal in 2003 where he stayed for 3 years till 2006. In his first season in the club he scored 20 goals and this immediately endeared him to the fans. In the 2004-2005 season he scored his first hat-trick. In 2005 he became the club's captain and shone as the club's top goal scorer for three seasons. In the 2005-2006 season he was named the Dutch Footballer of The Year for his sterling performance in that season. He made 101 appearances for the club and ended his season at Feyenoord with 29 goals.

He joined Liverpool FC in a £10 million transfer deal. He made 285 appearances and scored 71 goals for the team .In the 2010-2011 season he was Liverpool's top goal scorer with 13 goals.
In 2004 he made his international debut for his Netherlands team and went on to represent Netherlands in 3 world cups and one European championship. 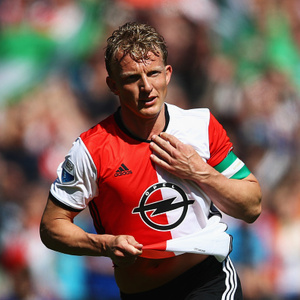