What is Diogo Jota's Net Worth and Salary?

Diogo Jota is a Portuguese professional footballer who has a net worth of $18 million Deigo Jota plays for the Premier League club Liverpool as well as the Portugal national team. Prior to this, he played with Paços de Ferreira, Atlético Madrid, FC Porto, and the Wolverhampton Wanderers. On the global stage, Jota has represented Portugal in the UEFA Nations League and UEFA Euro.

Diogo Jota was born as Diogo José Teixeira da Silva on December 4, 1996 in the Massarelos area of Porto, Portugal.

Jota began his club career with the youth setup of Paços de Ferreira in 2013. Subsequently, at the beginning of the 2014-15 season, he was promoted to the club's main squad. Jota made his senior debut by starting in a 4-0 home victory over Atlético de Reguengos. He went on to make his first Primeira Liga appearance in early 2015 as a substitute for Diogo Rosado in a 2-2 home tie with Vitória de Guimarāes. A few months later, Jota signed a new five-year contract with Paços.

In March of 2016, Jota signed a five-year contract with the La Liga club Atlético Madrid. Later, in August, he returned to Portugal to join FC Porto on a one-year loan. In October, Jota recorded a hat-trick in a 4-0 win against Nacional. He went on to participate in the 2016-17 UEFA Champions League, scoring his first competition goal in a 5-0 victory over Leicester City.

Jota joined the English Championship club Wolverhampton Wanderers on a season loan in the summer of 2017. With the club, he scored his first goal in a 3-2 victory over Hull City. In early 2018, it was reported that Jota had made a deal to remain with Wolverhampton. During his first year, he scored a career-best 17 league goals as the club was promoted to the Premier Leagues. Jota subsequently made his debut in the English top division in a 2-2 home tie with Everton. In late 2018, he recorded his first competition goal in a 2-1 win over Chelsea. A little over a month later, in early 2019, Jota notched his second career hat-trick in a 4-3 win over Leicester City. He recorded another major accomplishment a couple months later with his winning goal against Manchester United in the FA Cup; in the process, the Wolves advanced to their first semifinal in that competition since 1997-98.

The 2019-20 season was Jota's final with the Wolves. In July, he helped the club win over the Crusaders in the Europa League second qualifying round; this was the Wolves' first European goal since 1980. The Wolves ultimately reached the final Europa League group stage, during which Jota came on as a substitute and completed a hat-trick to give his team the win. He scored another hat-trick in the first leg of the tournament's last 32. Jota made his final Wolves appearance as a second-half substitute in the Europa League quarterfinal against Sevilla. 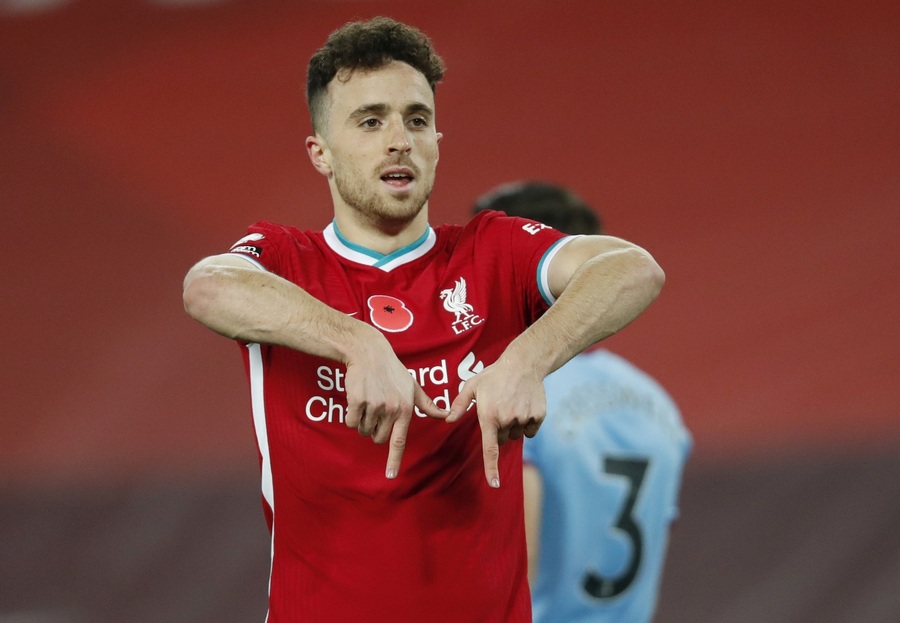 In September of 2020, Jota signed to Liverpool. He subsequently made his debut in the EFL Cup as a second-half substitute in a 7-2 victory over Lincoln City. Following this, Jota made his Premier League debut for Liverpool, scoring in a 3-1 win against Arsenal. In October, he scored the winning goal against Sheffield United; just three days after that, he scored Liverpool's 10,000th goal. Jota continued his success in November, scoring a hat-trick in a 5-0 victory over Atalanta. However, his season came to a halt in December when he weathered a leg injury during a UEFA Champions League match; he was consequently sidelined for three months. Jota finished his debut season with Liverpool with nine league goals, helping the club finish third in the Premier League.

In 2021-22, Jota scored Liverpool's first goal of the Premier League season in a 3-0 win over Norwich City. Later, he scored in a 5-0 victory over Manchester United and in a 2-0 home win against Atlético Madrid. In November, Jota recorded his fifth league goal of the season in a 4-0 victory against Arsenal. He followed this with goals in victories against Southampton, Everton, and Newcastle United. In early 2022, Jota scored both goals in Liverpool's 2-0 victory over Arsenal in the second leg of the league cup semifinals. In the subsequent final against Chelsea, he helped Liverpool win its first league cup in a decade.

On the international stage, Jota began playing for the Portugal national team at the under-19 level. In May of 2015, he scored his first goal in a 6-1 victory over Turkey. Later that year, he won his first cap for the under-21 team in a 3-0 win against Israel.

Jota was called up as a senior in March of 2019. In June, he was part of the squad that won the UEFA Nations League Finals, although he didn't make an appearance on the field. He finally made his debut in November as a substitute for Cristiano Ronaldo in a 6-0 routing of Lithuania in a UEFA Euro qualifier. The next year, Jota scored his first international goal in a 4-1 home victory over Croatia in the UEFA Nations League. In the delayed UEFA Euro 2020 tournament, Jota appeared in all of Portugal's games leading up to the team's round of 16 loss to Belgium.

Jota is in a longterm relationship with Rute Cardoso, with whom he had a son named Dinis in 2021.

A serious gamer, Jota maintains his own eSports team called Diogo Jota eSports. He streams regularly on Twitch, and in early 2021 was ranked world No. 1 on FIFA 21. 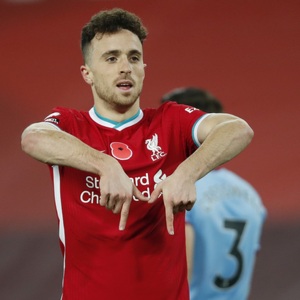