How much is Diego Maradona Worth?

Diego Maradona Net Worth and Salary: Diego Maradona was an Argentine football coach, manager, and former professional soccer player who had a net worth of $500,000 at the time of his death. Maradona died on November 25, 2020 at the age of 60. During his career as a player and coach, Diego earned tens of millions of dollars from salaries and endorsements. In the early 80s he was one of the highest-paid athletes on the planet, earning several million per year from salaries and endorsements with companies like Hublot, Puma and Coca-Cola. Unfortunately he experienced some financial issues later in life which we detail later in this article.

Many consider him to be the best soccer player of all time (the choice is generally narrowed down to Pele or Maradona). Diego wowed fans with thrilling runs past multiple defenders, and his dribbling technique was exceptional. He was also an excellent playmaker and instinctual goalscorer who could sink set pieces with ease. Maradona is a hero to the Argentine people, having elevated their national team to a World Cup win in 1986.

While Diego often left much to be desired in terms of sportsmanship while on the field, his personal life outside of sports totally eclipsed his professional career in terms of controversy. Throughout his life, Maradona has struggled with drug addiction, financial issues, health problems, and the pressures of international fame. After retiring from football, the Argentine legend began a managerial career.

Early Life: Diego Armando Maradona was born on October 30th of 1960 in Buenos Aires, Argentina. Raised alongside six siblings in a shantytown on the outskirts of the city, Diego lived in poverty during his early childhood. Things changed when his early skills were spotted by a talent scout, and he started playing for a youth team.

Career: At the age of 15, Diego made his professional debut for Argentinos Juniors and became the sole provider for his impoverished family. Quickly impressing on a national level, he was purchased by the Boca Juniors in 1981 for a $4 million fee. He spent only a year at the club he supported as a child before transferring to Barcelona in 1982 after an unsuccessful World Cup campaign.

There was considerable anticipation when he arrived at Barcelona, a team that paid a record-breaking fee of $7.6 million to sign the young star. Although Maradona was adored by Spanish fans and he continued to perform well for the team, his tenure at the Catalan city was marred by a number of controversial incidents. In 1984, a heated exchange saw Diego assault several Athletic Bilbao players, and he knocked one of them out with a knee to the head. The brawl led to a fully-fledged riot within the stadium, and Maradona was subsequently dismissed from FC Barcelona.

Napoli broke the world record transfer fee that had been set by Diego earlier, paying about $10.5 million for the Argentine. It was here that Diego reached his peak, leading the team to two titles (including their first in history) during one of their true golden eras.

During this period, Diego helped Argentina win the World Cup in 1986. He famously struck the ball with his hand in order to score against England in a controversial 2-1 victory. When asked about it later, Maradona denied the handball, suggesting instead that it was "the hand of God." The remark has become one of the most often-repeated moments in soccer history.

At a certain point, his personal life off the pitch caused a rapid decline in his playing career. The 1990 World Cup was a disappointment for Maradona and the Argentinian team. In 1992, he was forced to leave Napoli after testing positive for cocaine. In 1994, he was thrown out of the World Cup after failing a drug test once again. Over the next few years, he played for teams like Sevilla and Newell's Old Boys before returning to Boca Juniors to end his career.

Addiction Issues: Diego Maradona became infamous for his addiction to cocaine. It is alleged that he was completely dependent on the substance from the mid-80s till about 2004. Unfortunately, his consistent use of the drug impaired his ability to play football, and this eventually became evident after his move to Napoli.

During his time in the Italian city, he accepted the protection of a mafia crew who supplied him with drugs and women as he traveled through the streets unmolested by obsessed fans. Eventually, he tested positive for cocaine in 1991 and left Napoli in disgrace. He also tested positive for ephedrine after playing two games at the 1994 World Cup. 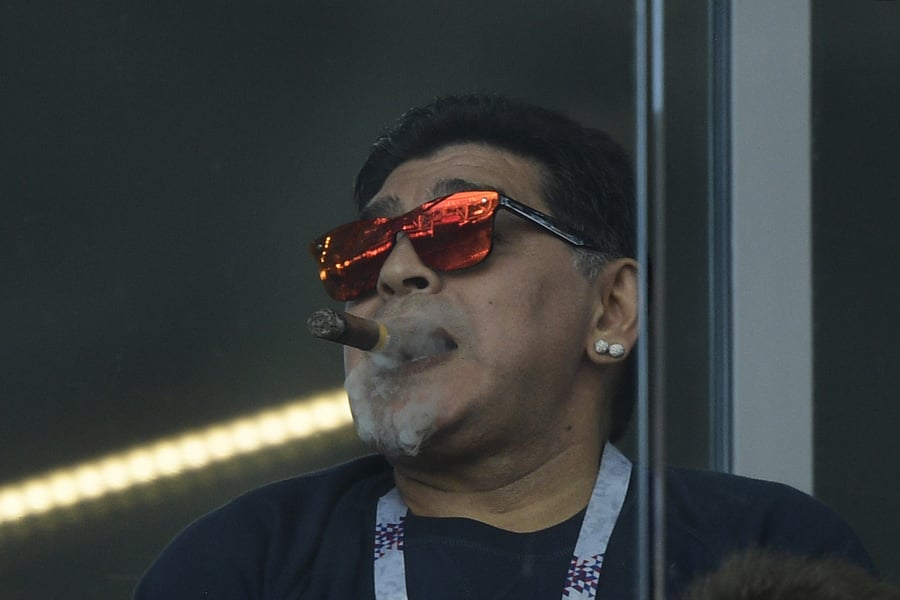 Health Problems: Maradona's decline in health and physical fitness began even before his retirement from soccer. While at Napoli, his lifestyle began to spiral out of control and he spent most of the week partying in between games. He also began to put on weight and started to look less and less fit towards the end of his career. After retiring, Diego's health entered an even steeper decline. He quickly became obese, and at one point weighed a total of 280 pounds. Eventually, he received gastric bypass surgery in 2005 to deal with his obesity.

However, Maradona continued to abuse alcohol, and in 2007 he was hospitalized due to hepatitis and adverse effects of heavy drinking. Rumors of his death soon followed, but Diego later emerged from a psychiatric facility after getting treatment for his addiction issues. In 2007, he stated that he had not consumed alcohol or taken drugs for many years. In 2018, he collapsed in the stands while watching Argentina play at the FIFA World Cup and required treatment from paramedics. Throughout the game, Diego drank white wine, swore at nearby fans, and raised his middle finger to cameras that captured the incident. In 2019, he received treatment for internal bleeding caused by a hernia.

Legal Issues: During the 90s, Maradona struggled with a number of notable legal issues. The first came in 1991 after Diego discreetly tried to meet with prostitutes in Napoli. He unwittingly called an illicit service to organize the rendezvous on a line that was being monitored by the Italian authorities, and they recorded the entire conversation. Because he shared cocaine with the prostitutes, he was eventually charged with a slew of offenses, including distribution and possession of cocaine. After testing positive for cocaine that year, Maradona tried to evade the police and flee to Argentina, but he was brought back by Italian authorities while in tears.

Another major issue came during in 1994 during the FIFA World Cup. In addition to failing a drug test and being dismissed from the competition, Maradona made headlines in the early stages of the tournament when he opened fire on journalists with a pellet gun from his hotel. Several reporters were injured. Four years passed before he was charged with a suspended sentence of two years and ten months.

Financial Issues: Diego Maradona was involved in a tax dispute with Italian authorities dating all the way back to his time playing in Napoli. The unpaid taxes have been accumulating fines and fees for a period of over 30 years. In 2009, Italian officials publicly announced that Maradona owed 37 million Euros in unpaid taxes, which included 23 million Euros in interest.

Police seized some of Diego's jewelry to pay off the debt, roughly 42,000 Euros. The vast majority of the remaining debt remained unpaid. Maradona insisted that he had no intention of ever paying the taxes, and claimed that he was unfairly mistreated by the Italian authorities. As a result of these statements, Diego was accused of defamation. 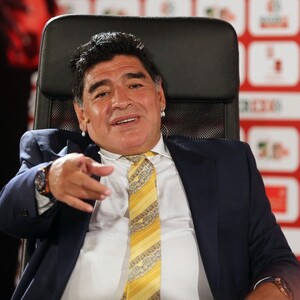